This morning, we jumped in the car with every intention of going to Pittsburgh.  Since my cell phone needed to be recharged, I plugged the splitter into the cigarette lighter, and tried to connect both the car recharger and the Sirius satellite radio.

This happened when I tried the same trick just a few weeks ago, so I knew that we'd blown the fuse for the radio and the cigarette lighter.  Instead of heading for the Interstate, we drove around the block, parked the car, and changed the fuse.

By that time, my interest in going to Pittsburgh had evaporated.  But we did need to pick up some weatherstripping tape at Lowe's, and I needed to return something to the mall that's out that way, so we ran a few errands and--as usual--came back with more stuff from Lowe's than we'd set out to buy: the tape, and also a folding stepladder that I've been wanting for awhile, and some bulbs that were on clearance, and a package of shims...because, as I found myself saying, "You never know when you might need some shims."  Man, if ever there's a middle-aged pronouncement, that's it.

Anyway, we came home and used the weatherstripping tape to put the plexiglass in the front storm door (we've never been able to locate the actual sliding glass mechanism).  Then I decided to fix the fireplace screen, which has always been a rickety piece of s**t, but recently fell apart completely when the wood split around one of the dowels that holds it together. 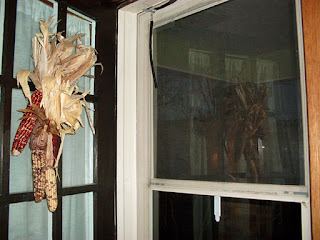 Down to the basement to fix that up with some wood glue and a clamp. 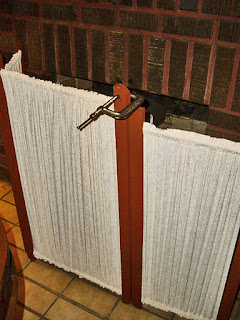 And then I thought: that rug in the sunroom really needs to be cleaned.  So, I hauled it down to the basement, put it on some plastic sheeting, and went over it a few times with the Little Green Machine. 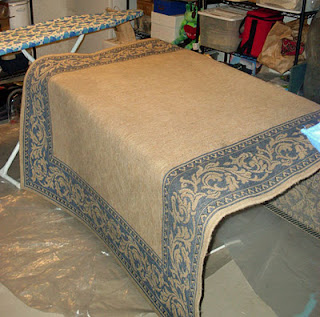 As long as we had the rug out of the sunroom, I wanted to sweep in there, and maybe rearrange the furniture.  It's been seeming very crowded to me lately. 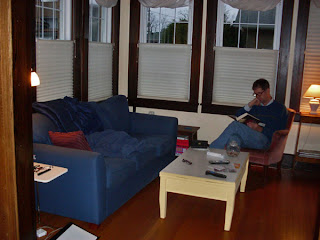 This, of course, involved cleaning out a garage-sale credenza that was full of old New Yorkers (which went into a box for recycling), and then the credenza went out to the garage.

While we're in the garage, might as well get out the plastic to weatherproof the screen porch (though that did not happen today).

At some point, Tom said, "You're puttering today, aren't you?"

And yes, I was.  My dad was a great putterer, and after he died my mom realized how much he accomplished in any seemingly agenda-less day.

I clearly got the puttering gene, though unfortunately I didn't inherit his mechanical skills (or just didn't learn most of them).

Still, I felt like I'd accomplished a lot today, including a task that honored Dad: I watered and cut back the leggy, overgrown geraniums that we put up in the attic a couple of weeks ago.  He grew them from starts, and loaded me up with a fresh batch every spring.  Though most of the trimmings went in the trash, I did save some blooms to add to my Dia de los Muertos altar. 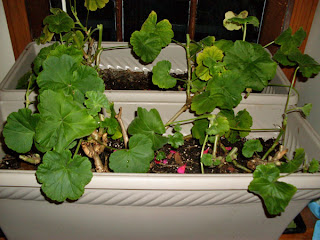 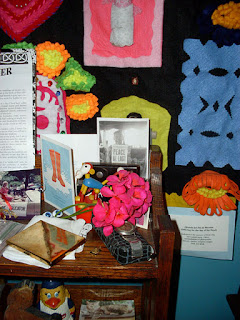 At the end of the day, I actually felt like I'd earned a brief respite on the little red stool at the basement workbench.  It's the one that I always remember Dad perching on in his basement workshop, and now it graces mine. 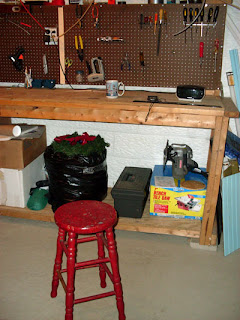 Now, lest you think Tom was doing nothing all this time, he was making a fabulous dinner: homemade whole-wheat pasta with kale, white beans, and tomatoes. 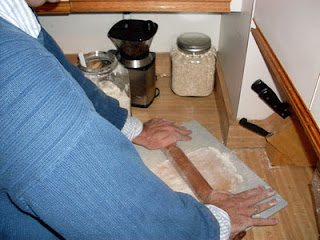 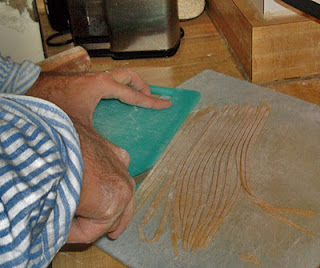 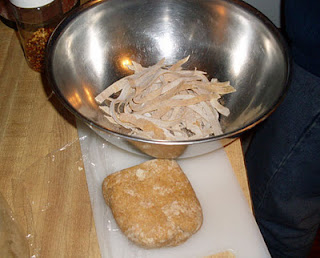 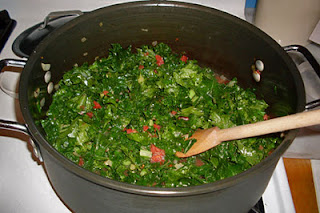 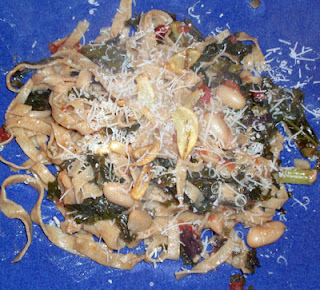 It was yum.  And, with a big glass of red wine, a nice reward for a long day of this and that.

By the way, did I mention that it's Thanksgiving Break?  Nice to have a Sunday that really feels like a weekend for a change, instead of being a day for grading or course-prepping.
Posted by Rosemary at 8:06 PM 3 comments:

Today, as we walked home from work, snow was in the air, and not too long after we got home, it was sticking to the ground, for the first time this fall. Winter is here. So we decided that we'd have chili for dinner and that we should make some cornbread to go along with it.

So I dug up Paul Prudhomme's cornbread recipe, which we always use: it's sweet in just the right way, though we only use about half of the recommended amount of sugar. We also never use the corn flour (because we never have any in the house, and frankly, have never seen it for sale anywhere), and we just substitute a 50-50 mix of regular corn meal and regular flour, and it works out fine. Our pan is plenty old, and it's pretty well 'cured' like cast iron should be, so it cooks just fine, even though it looks a little grungy. 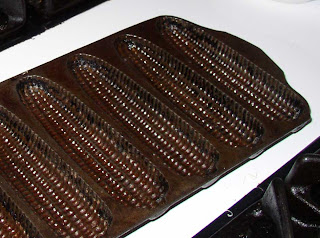 The first time we used it, I wasn't very sure about the old pan: cornbread baked in an ear-of-corn pan just seemed a little corny, I guess. But the corn stick is actually the perfect shape for a piece of cornbread: the right size for a serving, with a lot of surface area to give the sticks a tasty crunch.

Half a recipe (including only half an egg) works perfectly to fill up the seven ears of the corn stick pan. No pictures of the sticks out of the pan, I'm afraid: I didn't grease the pan up quite enough this time, and they came out in chunks--but very tasty ones. 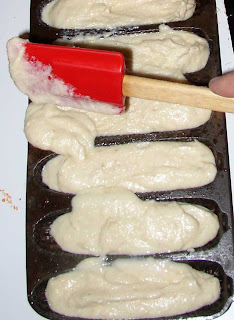 Vintage Griswold cast iron (made in Erie, PA) is always collectible, but there doesn't appear to be any shortage of these on eBay, where you might be able to pick one up for ten or twenty bucks. But when winter comes around, and you want

cornbread, it's worth every penny.