Yes, it's another #MeToo post...because this week has broken me. 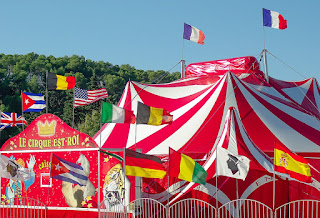 In the midst of the cretinous circus that's been playing out on Capitol Hill this week, the thing that has struck me most is the off-the-charts level of denial it takes for some people to think that a woman would make up a story like this to get attention. Christine Blasey Ford has gone public with her very private trauma only to be subjected to death threats.

Think about that for a second. You tell your story, and people who don't even know you--who don't even have a dog in this fight, really--want to kill you.

It's not the fact that those folks think she's making it up that bothers me so much as it is what that belief reveals about the depths of misogyny in this country: that there are people who genuinely believe that women are so fundamentally unstable, needy, and plain bat-shit crazy that they will willingly--nay, enthusiastically!--throw their careers, families, and reputations under the bus in order to 1) get famous; 2) blindly serve someone else's political agenda; or 3) just for the hell of it, because, WOMEN. You know, they're like that.

To me, that realization--that a significant number of people believe that women are innately crazy, and therefore dismissible and disposable--is even more depressing than the hearings themselves.

I think--well, I know--that part of the reason that this case has pushed my buttons even harder than usual is because Brett Kavanaugh and I are of an age. Both born in 1965. While I didn't grow up with the kind of privilege he did, I did grow up in an affluent Midwestern suburb where I went to school with lots of people, male and female, who did.

Back then, in the early 80s, it was a real social coup to find out about a parents-are-out-of-town, let's-have-a-party at the house of one of the kids who lived in the really rich parts of that town. Even better if it was a party thrown by someone who didn't even deign to go to the public high school, but to one of the private schools.

(Thankfully, now) I didn't run in the kind of social circles where I ever would have been invited to those parties--I wouldn't even have thought of crashing one. I do remember driving by one, once, on Wolfe Park, where hundreds of teenagers spilled out of the enormous stone mansion and down the meticulously groomed grounds to the street. At the time, it seemed glamorous: a way of life that I could only read about in The Preppy Handbook, which I read more as an aspirational DIY manual than as the parody it was.

The image of that party has popped into my mind all week, since it's at such a gathering that Christine Blasey Ford was attacked. Could I imagine such a thing happening at that house party on Wolfe Park? Absolutely. Did such things happen? I wasn't there. I don't know. But if I met someone now, 35+ years later, who told me that she'd been attacked at that party, I would completely believe her. And I would also believe that her attacker went on to become a well-educated, wealthy, and powerful man--one who would be just as shocked to be confronted by his victim as Brett Kavanaugh was.

And that was the other thing that pushed my buttons hard: does Kavanaugh even remember that night? Did he know her name then? What so many people don't seem to understand is that just because he doesn't remember it doesn't mean it didn't happen. Trauma sears memories indelibly into the brain. The fact that she remembers it so clearly is backed up by brain science. The fact that he doesn't is backed up by patriarchy.

My friend Erika posted something on Facebook yesterday that resonated deeply with me:


Several months after I escaped a rape attempt, I passed the guy (a stranger to me) on the street. I stopped in my tracks. I know, 100%, that he was the one, because he stopped in his tracks too, and I saw the fear and recognition in his eyes. Time arrested for a moment, then we each walked on.

I can’t fully recall in detail the face of my boyfriend at the time, but I’d swear I could pick out my would-be rapist from a crowd. As he was then, and I think even as he has become.

I wonder if he would recognize me.

I was raped during my junior year of college. It was date rape--a guy I'd met at a bar, who came home with me and wouldn't take no for an answer. At the time I told no one. I was ashamed. It was my fault, of course, for letting this guy into my apartment. What did I expect?

The fact that I can now describe it as date rape is a very recent phenomenon. Though I called myself a "feminist" in college, even I was uncertain as to whether what happened to me "counted" as rape or not.

And I remained uncertain until just a few years ago. My friend Christina was clearing out her house in preparation for a move, and she gave me all the letters I'd sent to her while we were both in college. Looking through them, I came across a letter in which I described what had happened that night. Honestly, I didn't even remember that I'd written to her about it. But there, in black and white, I told her about how I'd said "no." Multiple times. And still this person persisted.

When I read Erika's post, I remembered something else: that a month or two after the rape, I was sitting in an English class in University Hall when the door swung open shortly after class had started, and there stood my attacker. He'd apparently wandered into the wrong room. Though he was probably only in the doorway for a few seconds before he realized his mistake and turned away, like Erika, those seconds were frozen in time. We locked eyes, and I know he remembered.

What makes me especially sad as I write all of this is that I don't think I could have told this story publicly had my mother not died earlier this year. I wouldn't have wanted her to know. Not because she would have been ashamed of me, or blamed me--though for sure, that's why I didn't tell her then, or in the thirty years afterwards. But because she would have been sad, too. And hurt, and guilty. I wanted to spare her that. More evidence of the many forces that keep women silent.

So when our President claimed that Dr. Ford's story couldn't be true, because if she really had been attacked, of course she would have told her parents, and they would have prosecuted Kavanaugh...well, the most charitable way I can describe my reaction is "Wow. You really, really don't get it at all." He doesn't get it on any level: not on an emotional level, not on the parent/child-relationship level, not on a historical level, not on a legal level. Of the innumerable ignorant statements that man has made since taking office, that is one of the most profoundly ignorant. And that's saying something.

But the thing is, he's voicing what a lot of other people are thinking.

So add that to the list of things we've all learned this week: first, a good number of people think that women are flat-out crazy and bent on destruction. And second, that even though they're crazy (maybe because they're crazy?), no one else can be held accountable for what happens to them.

Duly noted. And grieved.
Posted by Rosemary at 12:17 PM 7 comments: