Wherein Rosemary tears up her PhD and hires on at McDonald's

Part of my job at WVU is to work with our English-education majors, both in the classes I teach--especially the young-adult literature class--and out in the local schools where they're doing their observations and student teaching.

I love this aspect of my work, and in fact applied for the job here three years ago specifically to do more of this sort of thing, which I'd started doing at UNC when we were short an English-ed faculty member or two.  There are few things more rewarding than working with future teachers, and seeing (sometimes in scary ways) exactly how the content students learn in their English major gets filtered down to the high-school classroom.

And then, I come across something like this.  Perusing our SiteMeter stats for this week to see how people arrived at Romantoes, I learned that someone in Port Saint Lucie, Florida, found us by Googling "the advenchers of tom scourer who is the author." 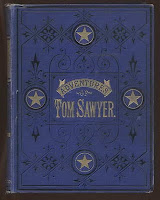 You know, Tom Scourer, by Samyul Clemmunts, better known as Margt Wayne.  Sigh.
Posted by Rosemary at 8:57 AM 3 comments:

Email ThisBlogThis!Share to TwitterShare to FacebookShare to Pinterest
Labels: meta, tales from the classroom 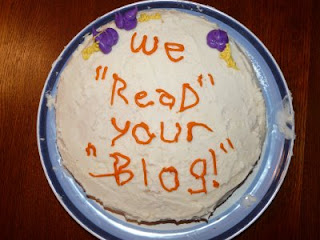 I had an interesting voice mail on my work phone yesterday, from a guy in Charleston, who said he needed to talk to me about some of the things I'd been finding out at yard sales and so on. It took me a little by surprise, and it wasn't until he mentioned some old WVU dance cards that I realized he was talking about an old blog here on Romantoes.

Apparently, one of the dance bands mentioned there had been led by his dad back in the 1920s, and he had been surprised and delighted to see his dad's name on our blog.

I was surprised, too, I can tell you. We write here on this blog a) for ourselves, b) for a small group of people who we know are readers because they comment or give us occasional feedback in other ways, and c) for a possibly somewhat larger group of more-or-less regular readers who don't comment all that often--and that's about it. But sometimes, it seems like there's other folks who find something of interest on our blog, and it was a pleasant surprise to be reminded of that.

I called him back this evening, and we chatted about this and that (everything from comic books to rescue cats), before the Mountaineers game got started.

It turned out that only one of our dance cards came from a dance where this guy's dad had played, which was kind of a shame. But the card itself is a sweet little thing, from the Pi Beta Phi Spring Formal, March 26, 1927. The band is listed, there's a dozen spaces for names of dance partners (none filled in, in this case), and lists of Patronesses, Chaperones, and Active Members of the sorority. But it's got a nice leather cover and some neat glassine endpapers in a very 1920s spiderweb design.

I'll drop it in the mail to him tomorrow.

Email ThisBlogThis!Share to TwitterShare to FacebookShare to Pinterest
Labels: meta

When we lived in Colorado, we didn't have cable tv, an 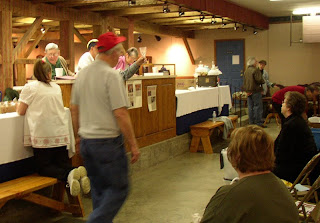 d were at the mercy of whatever the airwaves brought us (which was sometimes pretty interesting, in a weird way, like the news from Cheyenne). But we could get two different PBS stations from Denver, which was a first for me. One way the two stations distinguished themselves from each other was by trying to have different on-air fund-raising strategies. One station played all the Doo-Wop and Suze Orman you could ever want, and the other did even weirder things. The weirdest was probably their auctions.

Sometimes, it would be the traditional "silent auction" with different boards and where bidders would call in and talk to phone bank people and all that. But sometimes they would have real live auctions, too, with a real auctioneer doing the whole traditional sing-song thing (bidders also phoned in, but the selling was real-time). Usually they were auctioning off sports collectibles or furniture at these auctions and just about every time they were on I watched some of it.

I think it drove Rose a little crazy, of course, but as I told her, the sound of a real auctioneer has a kind of soothing effect on me. It's a sound I recall from my childhood, and I think I fell asleep many, many times as a child, listening to the song of the auctioneer. (My folks, for those who don't know it already, long had a second income from being antique dealers and I remember going to innumerable auctions, from truly rustic farm auctions up to more classy affairs).

Anyway, a couple of times over the last 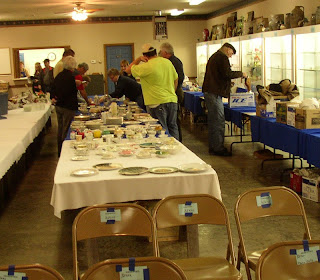 year or so, I've met up with my folks in central Ohio at a particular auction house where they have become regular buyers and (to their surprise) occasional employees. I've bought few small items here and there, and sold a couple of them on (for a profit, I might add) on eBay, but I've also come to see auctions like this one a little differently.

At this auction, for example, there are usually two (and sometimes more) auction rings operating simultaneously: at the right, you see what's left on one auction ring at the end of the day, working it's way towards me down this table of glass and china. Not many bidders: good for buyers, I guess, but not so good for the seller. The empty chairs face the main ring, shown at about the same time in the top photo.

Most real life auctions are like this one, of course, where an estate is being cleared out. And it's fun, still, to go and try to find a bargain, and I suppose it's good to support the local economy. And I still enjoy listening to the auctioneer patter and the jokes. But there's a sad side to auctions, too, I think. One of the things you really realize at an auction is that collections have a life cycle, too, one that is almost always closely tied to the lives of their owners. I'm not sure if that makes me more or less eager to gather my own collections, though I know I'd hate to see them auctioned off.

But maybe there's a way to see that buying something at an auction is not only a kind of recycling, but it's what any collector should want: for the things one collector loved to be bought and loved by another. So, while I hope to go to more auctions, and to find a few things I can sell on--I hope to buy some things that I can keep and love, too.
Posted by Tom at 7:49 PM No comments:

The fast and the furious 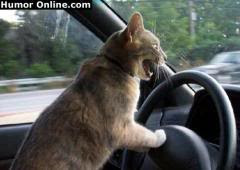 I gave up making big New Year's resolutions years ago.  You know, the traditional "lose 20 pounds, learn to say no, procrastinate less, be a faultless human being" kinds of goals.

Instead, if I make any resolutions at all (which I usually don't), they're very small.  It started several years back when I jokingly resolved that in the coming year, I would throw out any pen that didn't work.  Inevitably, shortly into January of that year I pulled a pen out of a drawer and found it inkless.  Remembering my resolution, I threw it away without guilt.  (That last part is important:  previously, I would've felt bad about throwing it out:  maybe it would work next time.  Wasn't I doing less harm to the environment by holding on to it, rather than delegating it to the landfill?)

I kept that resolution, and still throw out nonworking pens.  Consequently, I almost never grab one that doesn't work.  It's ridiculous, but that small choice genuinely reduced some of my daily frustration--and that's priceless. 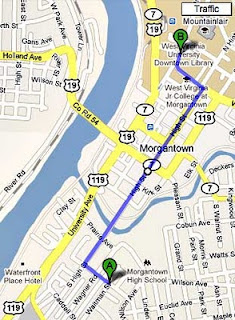 So, I've been trying to think about what kind of micro-resolution I could make this year that might have a similar effect.  Nothing really came to mind until I was walking to campus a few days ago.  It was the first day of the semester, it was 8 a.m., it was snowing and gray and cold...in short, I was in a foul mood.

As I approached the intersection (ironically) of Pleasant Street and High Street, the light turned green and I stepped into the crosswalk only to nearly be run down by a college-aged driver who glared at me as she turned in front of me.

This did not improve my mood.

I used to think that Greeley was the worst town for pedestrians that I'd ever lived in, but Morgantown quickly overtook the top spot.  My walk to school takes me straight up the main drag through downtown to campus, and every day it's kind of a dodgem car situation, especially at certain intersections--around the post office, in particular, but there are lots of other places where, if a pedestrian and a car are approaching at the same time, the car will cut off the pedestrian every time.

Problem is, I take this all personally.  When, of course, it's got nothing to do with me.  And if I'm honest, when I'm the driver, I get impatient with pedestrians, too.

I'm reminded of a great installment of the comic strip Potshots that ran in the Ohio State student newspaper, The Lantern, when I was an undergrad.  It was a two-panel gag.  The first panel bore the title "OSU student as pedestrian," and showed a student crossing the street, shaking his fist at a passing car and yelling, "Watch where you're going, buddy--can't you see people are trying to walk here?!"  The second had the header "Same OSU student, 15 minutes later," and showed the same guy behind the wheel of a car, shaking his first at a pedestrian and yelling "Get out of the street, you moron!"

Bottom line:  we're all a bunch of selfish, impatient @$$holes.

At any rate, I grumbled about the Pleasant Street incident all the way to campus, where--at the final intersection before my building--a very kind driver stopped and waved me across the street in front of him.  Sometimes I'll wave or mouth "thanks" when people do that, but a lot of times, I don't because I figure it's THE LAW, not a courtesy that merits recognition.  But then I thought, when most people are discourteous, shouldn't I acknowledge those who aren't?

So, that's my micro-resolution for 2010:  to try on my daily walk to work to ignore the crappy drivers as much as possible, and to notice and thank the thoughtful ones.  Somehow, I know that if I can do that consistently, it's likely to reduce my daily frustration level even more than tossing dead pens.
Posted by Rosemary at 7:49 PM 3 comments: