The aesthetics of "random"

A friend (or should I say "friend") posted a link to this video on Facebook the other day. I have to admit, I found it pretty damn amusing, if a little disturbing--I'm not sure I buy the dad's claim that he shot it because his son was scared about going to the dentist, and he wanted to have a "before" and "after" tape to convince the kid that everything was fine.

Anyway, the ethical discussion is for another day. What interested me is that the very next day, a blog I occasionally read posted the video below, which synchs some of the audio from the "original" to...a 1970s picture book about kittens.

Some of the juxtapositions are funny, others not so much. When I saw this, though, the word that sprung to mind immediately was "random." Is this what them crazy kids are talkin' about these days when they describe something, positively, even joyfully, as "random"? And will I sound tiresomely middle-aged if I say that random just isn't enough for me, aesthetically? 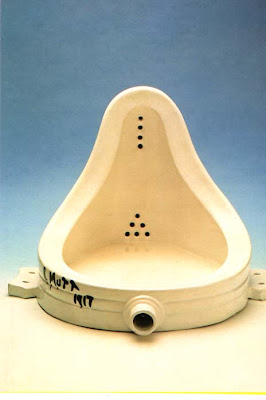 I get the whole postmodern pastiche thing--playing with copies of copies of trivial but somehow iconic stuff, like Duchamp's 1917 "Fountain," pictured at left. But when my students describe something as "random," the pleasure seems to be in the utter meaninglessness of whatever they're talking about, its lack of a reference point.

"Random" seems to have become the aesthetic for a certain generation. But what does random mean? Is random the aesthetic that fills the vacuum when "camp," "kitsch," and all the other self-referential, post-ironic modes are exhausted? Thoughts, please!
Posted by Rosemary at 6:50 PM

Email ThisBlogThis!Share to TwitterShare to FacebookShare to Pinterest
Labels: tales from the classroom

Whenever I hear someone say "random," almost as a compliment to a story or song or (art) work or gimmick, I think: That person is not willing to cogitate hard enough to say something specific about the work or his/her own reaction. About the first video, which my daughter showed me earlier, I might say, "That makes me laugh and uncomfortable at the same time, because when a child is strung out on an acceptable drug, it's weird in a safe way, but also makes me reflect on the behavior of teens or adults when strung out on a perhaps unacceptable drug." About the kittens and the audio track, I'd have to think harder, because the thing itself is frivolous, and the person who constructed it was not interested in meaning. So, doing something intentionally without meaning -- is that a nihilistic impulse? I mean, it can't be random, because it takes a little time to put this crap together, right?

To say something is meaningless is a judgment. And I'm willing to call that.

To say something is random is detached and safe and "fun." Random lacks commitment.

Incidentally, "random" is my least favorite wordpress tag. Like, couldn't everything fit in that category -- it's akin to uncategorized, no?

(Hmm, have I taken an interpretive position? I obviously haven't nailed this; these are my first thoughts.)

Jane, your suggestion that "random" is a non-committal term that people use in lieu of "say[ing] something specific about the work or his/her own reaction" puts me in mind of my 5th-grade teacher, Mrs. Shuman, who *hated* it when we kids called something "neat" or "neato"--she wanted us to be more descriptive.

So I guess "random" is the new "neat" or "cool" or "awesome" or "wicked": just a general, catch-all term that expresses approval and generational appropriateness.

I guess I can live with that, though the overthinking part of me (which is huge) still wants to know what *kinds* of things merit that label, and why.

BTW, you echoed my thoughts about that "David after Dentist" video exactly. Why do we find it so funny when powerless beings (kids, pets) are strung out on drugs given to them by adults/humans? Yet we do. Perverse.