How to waste time on Xmas eve 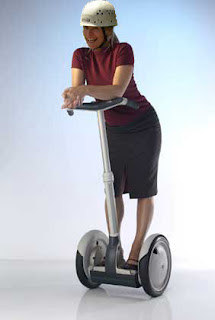 We're at my parents' in Columbus for Christmas, and last night my brother Mark and his wife Suzanne came over for dinner. At some point, the issue of Segways came up (I have no idea why). Anyway, Suzanne concurred with the recent assessment on "Wait Wait...Don't Tell Me" that riding a Segway was the 21st-century equivalent of wearing a propeller beanie, and allowed as how she wouldn't be caught dead on one.

This is a woman who used to have a white Ford Fiesta with magnetic cow spots on it and a license plate that read "NOT NRML," and who now can be seen riding around on a non-motorized scooter with oversized tires or jogging in shoes that she made ice-proof by attaching tacks to their soles. This is not someone who has the slightest concern about what she looks like, or what other people think about her; in fact, I think it's safe to say that that's what we all love most about Suzanne, is her flagrant rejection of social norms.

So for her to say that she wouldn't ever ride a Segway because she'd look silly--well, it's enough to prompt one to ask who this pod person was, and what it had done with one's real sister-in-law.

At the very least, it prompted me to spend a ridiculous amount of time on Christmas Eve day searching Google images for the perfect picture to Photoshop Suzanne's head onto. Once I'd found this one, the trick was to find a picture of Suzanne's head from just the right angle, since the original shot was kind of oblique. Success: a photo of Suzanne getting ready to ride the zip line at Snow Mountain Ranch in Colorado from a family reunion a couple of years ago. Oh yeah!

Some people spend the day before Christmas baking; some bring in fresh greens to decorate the mantel or put the final touches on those homemade gifts. If the Segway is, indeed, the 21st-century equivalent of the propeller beanie, then perhaps Photoshopping fake pictures is the 21st-century equivalent of those more homely holiday preparations. We'll see if Suzanne agrees when she opens up the matted, framed print of "Suzanne, the Segway Siren" later today.
Posted by Rosemary at 7:22 PM 3 comments:

Whew! Well, I just turned in my grades this morning, and I have to say I'm extremely grateful to have this first semester in my rearview mirror. Not because it was a horror, but just because I'd forgotten how hard it is to start a new job, even one that's not all that different from the one you just left. You know how it is, when you have to ask how to do *everything*, and where to put outgoing mail, and who to ask for help (and who will, in fact, actually be helpful).

On the whole, it was a good term--it took some time to get used to a new group of students, who turned out to be very like the students I had at Ohio State as a grad student: some incredibly bright, many bright but lazy, and a surprising number who just vanish into thin air in the middle of the semester, never to be seen again. Day one of fall semester started out with the Princeton Review naming WVU the country's #1 party school, and with the football team very nearly making the national championship game (if not for that loss to Pitt), I think we saw Mountaineer Madness at its finest, or worst, depending on your perspective.

The whole "Mountaineer" thing has been fascinating, actually. You'd think I might have been a bit better prepared, having grown up with two parents who are WVU alums, hearing the phrase "Go 'eers" with some regularity, and seeing my Dad fly the West Virginia state flag every June 20th (statehood day, and the day we closed on our house here--kismet, y'think?). But I was astonished when school started and a huge number of students wore WVU shirts not just regularly, but almost daily. That kind of school spirit was verboten when I was in college (OK to wear other schools' garb, kinda geeky to wear your own), and I kept waiting for it to die down, but it never did. (A foreign-exchange student from Spain in one of my classes and I privately shared our puzzlement about the t-shirt fetish at one point, not wanting to rile the natives!)

So, I asked at one point what the deal was with the Mountaineer thing--especially since the majority of students here aren't from WV, but from beighboring states like PA, NJ, MD, and NY. I allowed as how being a Buckeye was meaningful for me, but that it didn't seem to have quite the same quality or intensity as does being a Mountaineer. One student responded that Mountaineers are always underdogs, and thus have a fierce sense of pride bordering on defensiveness. That seemed right to me; the state motto, which is carved into almost every building on campus, is "Montani Semper Liberi": Mountaineers are always free. That sense of iconoclasm is really at the heart of being a Mountaineer, and I have to say, you gotta love a place whose identity is predicated on its contrariness.

And it nicely fits my own sense of having been liberated by the move east. I'm tired, but I'm so happy to be here.
Posted by Rosemary at 4:48 PM No comments: