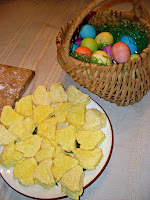 Somehow, we seem to have gotten into a holiday marshmallow making habit.

This time, my sister and I decided to make homemade Peeps.

We colored the marshmallow mixture yellow, and after it set up, we cut these out with a lovely old tin cookie cutter in the shape of a chick.

As you can see, some turned out better than others (which ended up looking more like teacups).  The trick seems to be to start with a very shallow layer of marshmallow, so the cutter can go clean through it.

We liked the chicks so much that we made some pink marshmallows and cut out bunnies, too. 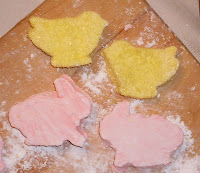 But the best treat of the holiday was that the Pasque flowers bloomed right on schedule.  If you've never seen these, they're lovely, and the blooms continue to look interesting even after the petals fall off.

Wishing you all a very happy spring! 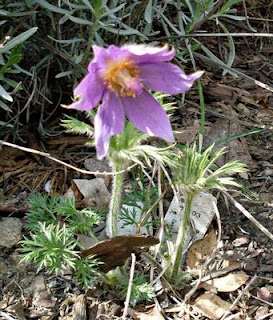 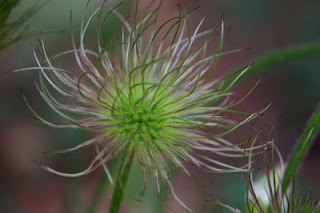 Blooming Pasque flower as it looked in Morgantown on April 19.  The lovely "after" photo is by Miriam Poling (courtesy of Creative Commons license).
Posted by Rosemary at 7:07 PM 2 comments:

A few days ago, I walked out of one of the buildings I was teaching in, passing right through the unofficial smokers' zone a few steps from the door. To my surprise, one of the smokers was sitting there on a bench, puffing away on a pipe, and I felt--as I often do when I smell pipe smoke--a powerful burst of nostalgia.

For years when I was growing up, my dad smoked a pipe, most often using Middleton's "Cherry Blend" tobacco (in fact, I think I remember that getting tobacco for him was considered, back in those long-ago days, an appropriate kind of Christmas or birthday present from us kids!).

But, anyway, the smell of pipe smoke is one I just can't help associate with my childhood. To a lesser degree, I also have surprisingly clear memories of the various rituals involved in his pipe smoking: my dad knocking the ash out of the pipe by beating it on his shoe, or using pipe cleaners for actual pipe cleaning, or re-filling his Zippo lighter with fluid. I remember, too, the peculiar metallic clink of the Zippo snapping shut. But it's the smell of the smoke that has stuck with me the most. I won't say I never felt a little queasy to be stuck in the back seat of a moving car filled with smoke, and I can't say that I have any specific or particular happy memories focused on pipe smoke, but, as smells so often seem to do, the sweetness of pipe smoke gives me a brief reminder, somehow, of what it was like to be eight or ten or twelve.

The story we'd always heard was that my mom had encouraged him to switch from cigarettes to the pipe for health reasons (this had to be around 1960, and she might have gotten it wrong, as it turns out), and I can't say I ever remember him smoking a cigarette. Certainly, cigarette smoke doesn't smell good to me.

My dad quit smoking sometime when I was in college: I remember being home during a summer or winter break, and saying, "Hey, I haven't seen you smoke your pipe for a while," and he said he'd quit. To me, it looked like quitting had been no big deal, since I never saw him going through it, but I had a summer job in the factory where he worked, and I was looking in his toolbox for something at some point and I found a half-empty cigarette pack. Cold turkey it wasn't, I guess.

It's been strange to think back on all this: if he started smoking in high school, he probably smoked for less than thirty years, and it's been almost that long now since he stopped. And so it's been almost thirty years since I saw--or smelled--him smoking. And while I certainly am glad he stopped, and I don't want him to take it up again, I'd be lying if I didn't say there was a part of me that misses it.

And that I wouldn't have expected, until I smelled that smoke the other day.
Posted by Tom at 4:56 PM 4 comments: