What a long, strange trip it's been

A few days ago, Romantoes marked its four-year anniversary.  Our inaugural post focused on the end of our first semester here at West Virginia University, after Tom and I both ditched tenured jobs in Colorado to move back east.

Yesterday, I turned in my tenure crate.  Yes, crate. 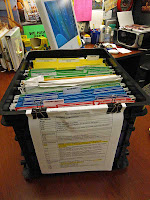 Don't let appearances fool you--that's not just any plastic milk crate, but the College of Arts & Sciences "official container," as the e-mail from our Department admin described it.  And, indeed, it has stickers all over it identifying where it came from, and who it's to be returned to.

Because I'd gotten tenure at my previous university, I figured it'd be no sweat to be untenured again.  To some degree, that was true: it was certainly less of a scramble to figure out how to juggle the teaching, research, and service parts of the job.  And I was largely unfazed by a lot of bureaucratic snafus that might otherwise have derailed me.

But in other ways, the experience of being untenured was much the same.  I've worried about making some huge mistake that would cost me my job.  I've been paranoid about whether people think that hiring me was a bad idea.  I've compared my own productivity unfavorably with pretty much everyone else on campus.

The tenure file itself, as you can see, is a monster.  We're required to include all of the materials that were in our past annual evaluation files, but they need to be disassembled, reorganized chronologically, and re-numbered and re-inventoried.  That part of the process nearly drove me mad, and I'm actually the kind of person who loves organizing stuff; I mean, one of the perks of this scheme was that it gave me an excuse to wander the aisles of Office Depot, debating the relative merits of reinforced hanging folders versus expandable ones.

At the end of last week, this is what my desk looked like.

Yes, I'd arranged everything into piles for each section that conveniently spelled out the word "PARTS":  "Preliminary" materials, "Administrative" materials, "Research," "Teaching," and "Service."  Clearly, I'd gone round the twist, as the Brits say.  I can't tell you how many people stopped in my doorway to laugh at me.  (This is one of the downsides of having an office located directly across from the first-floor women's restroom.)

But at any rate, I finally got everything printed out, numbered, inventoried, put in its correctly labeled folder, and transferred into the crate.  And then I hefted that bad boy down to the office and officially let it go.

And you know what?  I knew I'd feel relieved, but I figured I'd just feel relieved in the same way you feel relieved when any big project is over.  After all, I'd gone through this before, right?  So it's not like it's a novel experience.

But the thing is, turning that file in felt very different this time.  It felt not like an ending, but like a beginning.  In many ways, it felt like I was emerging from a four-year purgatory.  Seriously.  I don't think I comprehended just how tentative my position has felt for the past four years until I reviewed it, articulated it, packed it into that crate, and sent it off to someone else to evaluate.  All day today I've had a sense of placid liberation.

I'm sure the anxiety will rear its ugly head again eventually, as I await the decision of the Chair and the faculty evaluation committee.  But anxiety is absolutely what I don't feel at the moment.  The word that springs to mind, oddly, is "sanctified," though for the life of me I don't think I could explain why.

At Northern Colorado, after a couple of folks in our department got tenure, a colleague bought them a congratulatory cake that said "Greeley Forever."  Everyone laughed, and grimaced, and knew that inscription was half joke, half grim reality.  It was one of the many moments that led me to question the sacred cow that is tenure: why work so hard to get it if you assume it means you're stuck in a place and a job that you don't like?

Looking back on this blog's first entry from the vantage point of having just applied for tenure again, I'm happy to report that the sense of trepidation that comes through in that first post is gone, while the sense of wonder and pleasure about being here has only grown.  Here's to taking the leap. 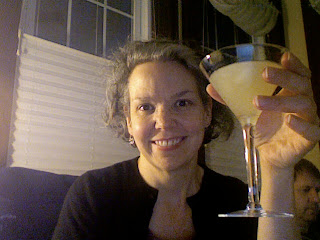 At the Seneca Center 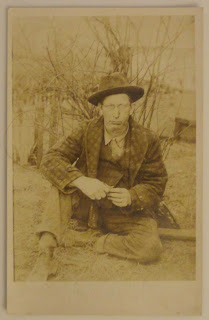 Today was the last day of school before "dead week," when we're not supposed to assign any real work, and when I came home from collecting papers in two classes today, Rose suggested we go out to the local antique mall in the Seneca Center, the former glasshouse down along the river.   It's a small antique mall--I think it may have only three or four dealers, and we figured we could easily get in and out in less than an hour.

But Rosemary, as she says, has one of those faces where sometimes people will just want to talk her ear off, and the woman behind the counter at the mall today certainly wanted to talk.  We browsed for a while, and eventually, I ended up snooping through some boxes of old valentines and postcards, while Rosemary got treated to a remarkable series of stories.

First, Rose was looking at some Irish Beleek porcelain cups and saucers, and she was asked if she'd ever drunk tea from a Beleek cup.  When Rose said she hadn't this woman said "Well--it's really amazing--it's just like...drinking tea from...a really thin china cup."  --which very nearly made me laugh out loud.

Then we got to hear about the woman's husband, and a strange story where he cut himself shaving, then went out to eat at the Elks Club with the whole family, where he ate all the food off their plates, then came home and said he hadn't eaten anything, only to realize with some mortification that he'd only shaven half his face (and then, for unknown reasons, he went to the neighbor's house).

We also got to hear about how this woman used to buy glassware seconds at the Seneca factory, when it was still open, and how drinking from real glass was superior to most other things, which led to a discussion of what sorts of gin and vodka she liked to drink, and it kind of went downhill from there. 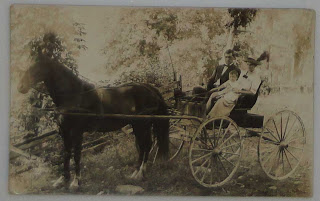 But while all this was going on, I did pick out two postcards to buy, one of the remarkable looking gentleman at the top of this post, presumably someone from West Virginia.  I got another of a family in their horse-buggy, dated 1914 on the back.  For some reason, I've become a bit intrigued with these old "Real Photo Post Cards" which were often probably printed up in a dozen copies or less: they are often family pictures, really, just printed up as postcards. You can often see the silvery glare of the emulsion, and they are truly ephemeral.  And once in a while the image is just arresting.  And I have to admit, I grew even a bit more intrigued by old photographs recently, when I followed a chain of blog-links to the 'My Daguerreotype Boyfriend' site, which I think one or two readers of this blog might find interesting enough to check out.

I also found this cool piece of vintage string art, a little picture frame around this old photo of a young woman on the phone.  The string is wound with incredible precision and intricacy; the whole thing is only about three inches across.  And, as the woman at the checkout told us, her mother used to make these.  Naturally. 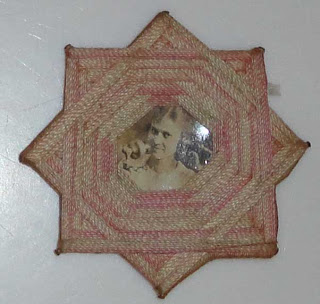 Lucky for me, these things are small, and they don't take up much space in the physical world.  Three more items for the flat file.