In memoriam: Toby, a magical cat

A friend of mine in Colorado once referred to a late feline of hers as a "magical cat." She didn't explain what she meant, but she didn't need to: I understood that she meant that it had been a once-in-a-lifetime cat, a cat with a personality so big that as its human companion, you understood that it owned you, and not the other way around.

Lucy was that kind of cat. 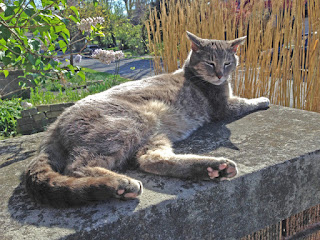 But so was Toby, the unassuming stray who started hanging around our house about five years ago. He wasn't a stunner of a cat--our nickname for him, in fact, was a reference to his melt-into-the-background color, a kind of grayish brown taupe that led us to refer to him as the "taupe tabby" and finally just "Toby."

"Toby" was just what we called him. No one knew what his original name was, because he'd apparently been abandoned by his original owners. He just turned up in the neighborhood, apparently unscathed by the trauma of being abandoned; I've rarely met a friendlier, more loving and trusting cat.

A neighbor who lived diagonally across the intersection from us eventually adopted him, in as much as Toby could be "adopted": during the day, he rambled around the block, sleeping on other people's porch furniture, running up to folks he recognized on the sidewalk for some attention, and supervising yard work. 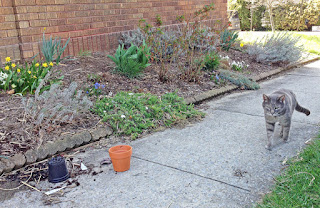 Every day, when Elizabeth got home from work, though, Toby would recognize her car and dash out of wherever he'd been, running up to her to welcome her home and to accompany her inside for dinner.

A couple of years ago, Elizabeth got a job in the D. C. area, and wasn't allowed to have pets in her new apartment. Toby had to stay in Morgantown--not so much because Elizabeth couldn't take him, but because she knew that this was his place, and he was the neighborhood cat, not her cat. Tom and I would have loved to bring him into our house, but our selfish spoiled felines had let us know long ago that Toby was not welcome. Fortunately, another neighbor, Brett, was able to take him, and so Toby remained.

Even though Brett lives at the end of the next block, Toby still considered the entire area around the intersection of Waitman and Simpson streets his territory, and would spend most of every nice-enough day making his usual rounds.

And trust me, Toby's threshold for "nice enough" was a lot lower than most cats'. Last winter we had an enormous storm that dumped a foot and a half of snow over one night, and the next morning, who was out on our front porch but Toby? Fortunately, our cats were sleeping upstairs, so we were able to let him in, and he promptly jumped on Tom's lap, purring up his own storm, and when he'd had enough of that, he made a beeline for the basket of cat toys that our ingrates never go near and promptly dug out a fluffy toy with a bell and began flinging it around like it was the Best. Toy. Ever.

But eventually, he was ready to move on--yes, through eighteen inches of snow. We tried to make him stay, but he wasn't having it. He had things to do, places to go, people to see. Brett had this experience with him regularly; the weather could be miserable, and Toby would still insist on going out. He took his job as the neighborhood cat seriously.

On warm days, he put in long hours on the heated-up sandstone walls of our front porch; even during last summer's cicada invasion, he slept directly under a lilac bush that was swarming with the noisy things, completely unperturbed.


When Tom or I got home, Toby was often there to greet us at the car, and accompany us to our door. The fact that we often fed him or gave him treats when he did this was part of his motivation, but he also just wanted you to know that he was there, that he recognized you--and vice versa.

And though he gave dogs a wide berth, he was always willing to give a human a chance. Not that he was foolish about giving his affection: if someone rubbed him the wrong way, literally or figuratively, he wouldn't hesitate to run away. But if you proved yourself to him, he was your friend for life, running up to you on the sidewalk, rolling around while you petted him, purring like crazy. There were many days when I'd be walking home from work, feeling tired or depressed, and here would come Toby, trotting up to meet me. And everything was better.

As I mentioned, we have two cats of our own who could really take or leave humans most of the time, including me and Tom. And they're very uncertain about strangers, especially ones under four feet tall. This has been a huge disappointment to the daughter of a friend of ours, who desperately wants to be friends with Pip and Stella when she comes to visit. But Pip and Stella are having none of it.

After being let down by the indoor cats yet again on a visit awhile back, I suggested that Maggie try her luck with Toby. We put a chair out on the front porch, Maggie sat in it, and sure enough, within a very short while, Toby was sitting out there with her. Not on her lap, as she'd hoped, but on the porch wall, right next to the chair. From the living room, I could hear Maggie's conversation with Toby.

"Pip is really cute, but she's not very friendly. And Stella's not nice at all. But you...you're different."

He was different, and magical. 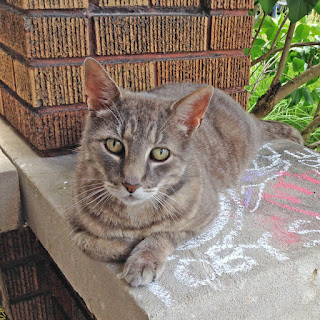 His magic became even clearer to me recently, when another stray cat showed up in the neighborhood. Unlike Toby, this gray-and-white cat is clearly feral--or else was so badly treated by people at some point that it's terrified of them. If he so much as catches a glimpse of us in the window or door, he runs away--and if we go outside when he's on the porch, he's been known to bail out, to literally drop sideways off the porch wall into a bush, to get away from us. But we knew that he'd also been eating the food we set out for Toby.

What we didn't realize was that the two of them had developed a system about how this worked.

A few months ago, I saw Toby sitting out on the front porch, giving me his intent "Hey, I know you see me--how about some food" look. So, I went out and filled up his bowl with kibble.

But he didn't eat any. OK, I thought, I guess I misunderstood your signals there. That's all right; you can come back and eat later.

Toby continued to sit in his spot on the wall, though, and a minute or so later, the feral kitty came creeping up onto the porch, and jumped up onto the wall between Toby and the food dish.

Well, I thought, now we're going to have a cat fight.

But no: the feral kitty started eating, and Toby nonchalantly jumped down and went on his merry way.

Then I realized: Toby had begged for the food for the other cat! He wasn't hungry, but he knew the other cat was, and he also knew that the feral cat was too skittish ever to show up on our porch and ask for food directly.

I was gobsmacked, and would have written it off as a fanciful bit of anthropomorphizing if I didn't see it happen several other times after that. Sometimes Toby would eat a few bites of food and leave the rest for the feral cat, who would wait patiently on the wall until Toby left; other times it was the same routine as the first time, where I'd put the food out and then Toby would wait to make sure the feral cat knew it was there before he left.

An altruistic cat? That's an oxymoron, isn't it? Toby showed me that the stereotype of cats--especially seasoned street cats--being selfish and mean is just that, a stereotype. He was as big-hearted as they come, whatever the species.

On Wednesday of last week I got a text from Brett, asking me if I'd seen Toby recently. There was a post on our neighborhood Facebook page saying that there was a dead cat at the intersection of Waitman and Simpson. A gray cat. "The one that hangs out on that corner, I think," wrote the poster. It had been hit and killed by a car.

Cruelly, I hoped it was the feral cat, who's also gray. Or maybe some other random gray cat in the neighborhood. But when I posted a photo of Toby on the Facebook page, the original poster said she was pretty sure that's the one she saw. But someone had (mercifully) removed the cat's body from the street, so it wasn't there anymore.

I was relieved that I didn't see the accident, or see Toby lying dead in the street. But that also allowed me to believe that maybe it wasn't him. How could such a street-smart cat be killed by a car? He knew better than that! But Simpson is a busy street, especially in the mornings, when school buses and cars are tearing up and down on their way to the high school that's a block away. Of course it was possible. Of course.

Still, when I got home that evening, I was keeping my eye out, hoping that Toby would come trotting up to greet me like always. And when he didn't, I thought, well, he may be inside somewhere. Or over in the next block. Denial.

Later in the evening, Tom went out to get something from his car. As he was walking back to the front porch, the feral cat dashed out from its hiding place between our house and the neighbor's, and boldly ran up on our front porch, knowing Tom would see him.

He was hungry. And he knew that his protector was no more.

And that's when I knew that Toby, our magical neighborhood cat, was dead.

But Toby taught feral kitty to be brave. And he taught me a lot about being open-hearted and trusting. For that gift, I will always love and remember him. And oh, how I will miss that handsome, loving creature. 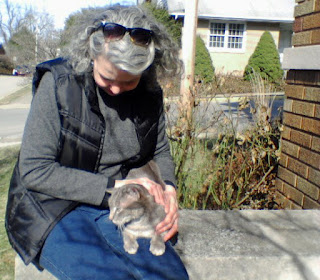