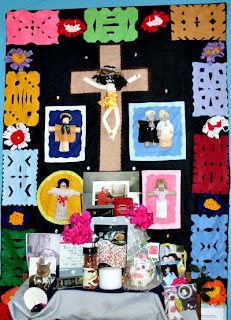 Ever since living in Colorado, I've been fascinated by Dia de los Muertos, which seems like a much healthier way to ritualize death at this time of year than the usual Halloween celebration.

This is the first year, though, that I've been motivated to actually put together an altar.  Given my dad's death last November, and the fact that next Saturday we'll be going to Grantsville, WV, for a memorial service as his ashes are finally laid to rest in the cemetery there, this seemed like the year to construct one.

Mine isn't traditional, but then, I'm a gringa and a lapsed Protestant borrowing this ritual (and I hope it's borrowing, and not co-opting or abusing).  On the other hand, if the Smithsonian can have a Dia de los Muertos Festival in Second Life, I guess "traditional" is a target that's moving even faster than I'd imagined. 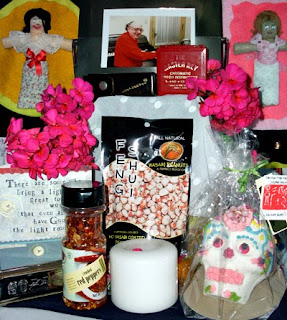 There are a few traditional elements, though, namely the sugar skull, which I bought last year at, of all places, the Appalachian Gallery a few blocks away.   Ironically (or fittingly), I bought it the weekend that my parents were visiting, when my dad first started having symptoms from his brain tumor. 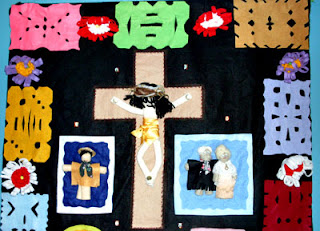 The beautiful hanging behind the altar is a piece created by Rita Flores de Wallace, a Mexican-American folk artist from Denver who was a good friend of the Greeley museum's folklorist, Georgia Wier.  This is the first time I've actually hung it up since we got it just before moving back east.  I wish you could see the whole thing--the bottom half is obscured by the altar.  But it is whimsical and colorful and full of amazing detail.

So, on this Day of the Dead, I honor and remember my dad, especially (and hope his spirit enjoys those wasabi peanuts and red-pepper flakes, and plays his harmonica and pitch pipe). 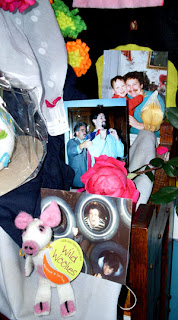 But there are also photos and mementos here of others who are on my mind today and often:  my late brother-in-law Terry (some garlic there for him); Tom's grad-school advisor, Nick Howe;  and of course, my friend Jay.  On the other side are photos and tributes to our old cat Lucy and to my sister's dear old dog Cecil.

None of them forgotten on this holiday, or ever. 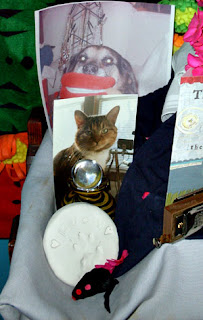 In the wake of the recent spate of suicides by gay teens and young adults who'd been bullied, harassed, and tormented because of their sexual identities, advice-columnist Dan Savage has started a YouTube project called "It Gets Better."

The project's goal is to help LGBT teens know that however bad things are at the moment, that isn't going to be a permanent state...they can and should live to see a time in their lives when they can be themselves, and be accepted for who they are.

James Black has written very cogently about the irony of Dan Savage taking up this cause, since Savage apparently has some bullying tendencies himself.

The point that James touches on, and that I hope isn't lost in the movement, is that it's not always kids doing the bullying.

One of my best friends all through school growing up came out after we started college.  That wasn't much of a surprise to anybody, but of course that doesn't make it any easier for someone to come out.  And for years he had been bullied, harassed, and tormented about being gay...but importantly, not ever, to my knowledge, by his peers.

In many ways I think he'd escaped that kind of treatment by other kids because he was just so damned charming and funny.  I mean, he was truly the funniest person I have ever known.  He was witty, punny, and could stage some of the best practical jokes imaginable with the straightest of faces.  He was also incredibly smart, musically gifted, and genuinely gregarious.  I really credit him for making my own time in high school as easy as it was--somehow, he single-handedly made it cool to be a nerd.

So who was doing the bullying?  Teachers.

I remember sitting in chemistry class my junior year when suddenly the door flew open and Coach Click came in, rolling Jay in front of him in a ball cage from the gym.  He'd apparently stuffed Jay in the empty cage, locked it, put it on the service elevator to the third floor, and proceeded to wheel Jay around from room to room.  (I should mention that Jay was a pretty small guy--probably only about 5' 3" in shoes, and very slight.  Hence, his ability to fit into a 3 x 3 ball cage.)  Jay characteristically laughed it off, I'm sure because he knew that not to would open the floodgates for others to pounce.

The year before that, Jay and I were in the same gym class.  The teacher, whom I've written about here before, was a nasty, sexist piece of work.  During the winter, he often closed the partition wall between the two halves of the gym and put the girls on one side and the boys on the other to play half-court basketball.  Needless to say, he generally stayed on the boys' side and ignored the girls altogether (which was fine with most of us, who weren't that enthused about basketball to begin with).

On one of those days, several minutes after pulling the dividing wall into place, the little door in the partition opened, and Mr. Speciale thrust Jay through, telling him to "Go play with the girls."

Even writing about that now, I find myself breathing faster, my muscles tensing up for a fight.

We need to remember that it's not always kids who are the bullies.  Adults--teachers--can be bullies, too.  And when they're doing the bullying, kids are even more powerless.  After all, aren't your teachers, your coaches, supposed to be the ones looking out for you?  When those alleged allies become the enemy, is it any wonder that kids despair?

Jay didn't kill himself.  At least, not directly.  But he did die of complications of AIDS three years after we graduated.  He died the summer before he was supposed to start his senior year at Cornell, a couple months after he'd returned from a semester abroad in Florence, where he was studying art history.

It's hard for me, even now--some twenty-four years after his death--not to blame it, on some level, on adult bullies like the "coach" and the "teacher."

Realistically, I know that Jay struggled with his sexual identity throughout high school, and couldn't be open about it for a whole lot of reasons that went far beyond the fear of proving those two right, or of inviting more harassment.  And I've resigned myself to the sad fact that it was just pure dumb-ass luck that Jay was becoming sexually active right at the moment when HIV was spreading like wildfire and there was no known treatment for it.

But still, part of me has always, always wondered:  if we'd lived in a world where it was OK for LGBT teens to be honest with themselves and others, would he have died?  Did he get infected because he had to seek out the answers to his questions surreptitiously, with strangers?

The hell of it is that Jay knew it got better.  It was better.  He loved his life, and had loved it all along.  But that life was still cut tragically short because of the stigma attached to his sexual identity.

I still miss him like crazy.  And I'd still like to kick Coach Click and Mr. Speciale in the teeth for what they did to him, and moreover for the message they sent to their colleagues and to students that it's all right for adults to behave in those ways.  Cool, funny even.

When the pre-service teachers in my classes start complaining about how kids don't respect teachers these days, and how much better it used to be in the "good old days" when teachers' authority was unquestioned, I remind them that a lot of teachers abused that authority in heinous ways, and were very seldom called on their abuse.  It astonishes me now to think about it, but at the time neither Jay nor any of us thought to report those incidents to another teacher, or to the principal, or to our parents.  That shit just happened.

So, that's my addendum to the anti-bullying campaign:  Bear in mind that bullies come in many forms, and some of them are full-grown monsters.  They're the ones who most deserve to be called on the carpet.  Don't be afraid to tell someone if it's an adult who's bullying you.  And if the first person you tell doesn't do anything to help, go to someone else and keep talking until someone does help.  Someone eventually will. And it does get better.