Fifty ways to get home for Christmas, nos. 1 and 2: Just hop on the bus, Gus

Somehow, I suspect that riding a bus through heavy snow in a rural area during the holidays was never as romantic as these corporate holiday cards from General Motors' Truck & Coach division make it seem: 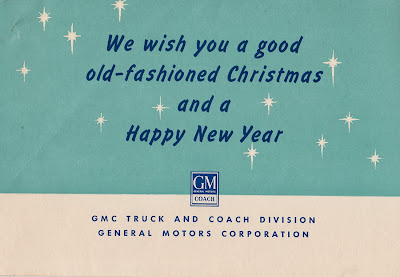 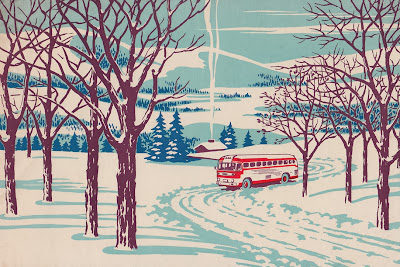 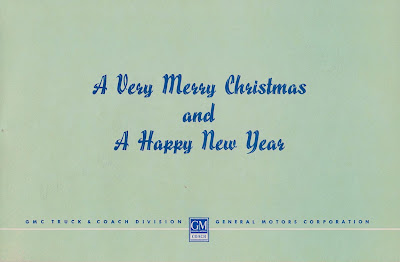 Are those buses actually on a designated road?  If so, the local residents really need to get on the municipality's case about the plowing situation.  This is why you pay taxes, folks!

--though I also like the idea of a giant old bus like this doing some off-roading to get its passengers right to their door in time for Christmas.

Time magazine, meanwhile, just sends Santa up in the kind of prop plane that you actually have to push to start, in this undated card/advertisement for last-minute gift subscriptions: 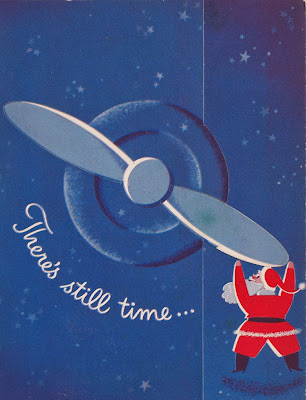 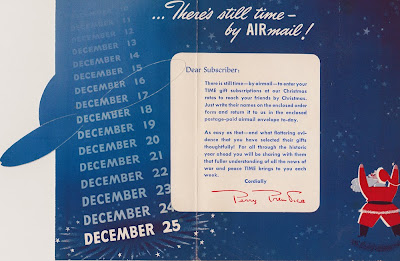 Hope our loyal readers are already safely arrived at their destinations, and don't have to rely on any of these forms of transportation to get there.  Happy holidays!  See the other pieces of Christmas ephemera from Tom's recent auction box lot here and here.
Posted by Rosemary at 12:12 PM No comments:

This is our second post about the box of ephemera that Tom got at an auction last month.  Previously, we focused on a couple of World War II-era Christmas catalogs from the lot.  There was also a Marshall-Fields Christmas catalog in there, but it's a little unclear whether this one is from the war era or slightly later.  Check out the rather unappetizing turkey on the cover! 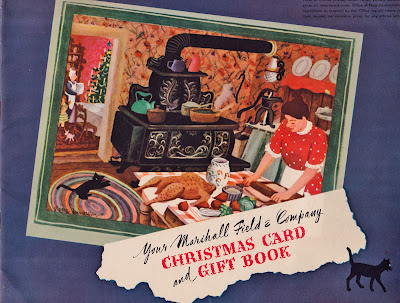 This catalog looks more like it might be from the late 1940s or the early 1950s, since there isn't any text indicating possible shortages of goods, and there seem to be a lot more "luxury" items here, things that I imagine might not have been available during the war, like the elaborate poker set advertised on the back cover: 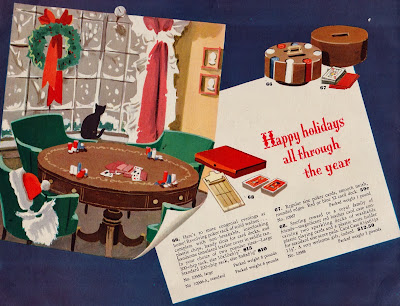 You might have noticed a theme here:  there's a black cat wandering through the pages of Marshall-Fields' catalog.  Sometimes it's your typical housecat, as on the covers.  But other times, it takes on some weirdly human characteristics to complement the goods advertised:

--or to reflect the general holiday spirit:

But I especially like "Musketeer/Art Cat," below.  This page also suggests that we're still in the near postwar era, given the framed photos of servicemen advertised: 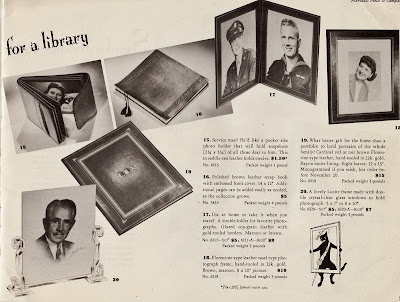 On a more local note, the box also included a catalog (also undated) from the Maramor Candy Company, a Columbus, Ohio institution.  The candy shop was attached to the Maramor Restaurant, which operated on East Broad Street in downtown Columbus from the late 1920s until the late 1960s.

(Check out this blog for an interesting account of the restaurant, which was owned and operated by an all-woman staff, and for a description of it by Alice B. Toklas, who apparently dined there with Gertrude Stein in 1934!) 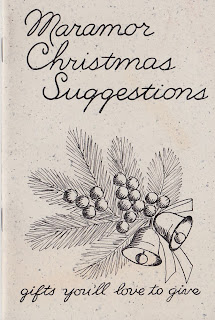 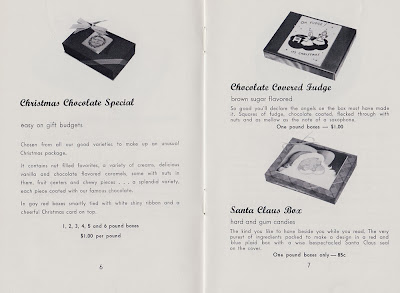 And check this out: if your order were small enough, you could pay for it in postage stamps: 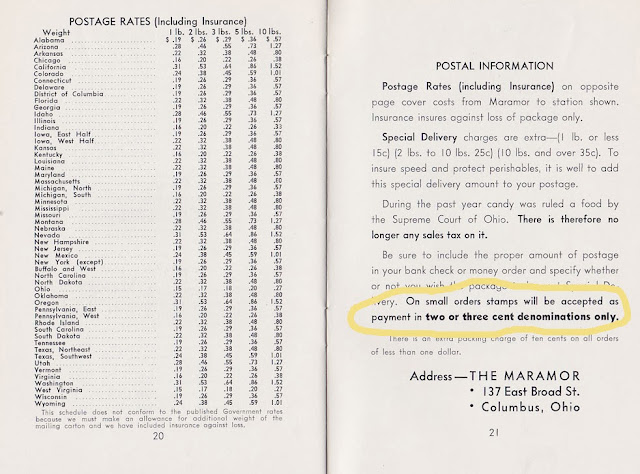 I was really surprised to discover that the Maramor is still in the chocolate-making business--though only commercially.  Actually, it's kind of difficult to tell from their website exactly what they do…but rest assured, "with [their] chocolate depositing equipment [they] are able to mould solid chocolates as well as one shot center filled pieces.  [They] also have state of the art enrobing technology that gives [them] nearly limitless enrobing capabilities."

So, in case there's anything you need enrobed in chocolate before Christmas, now you know who to call.

But somehow, the website is totally missing the charm of the old catalog, you know?
Posted by Rosemary at 7:56 PM No comments:

The holiday catalogs of WWII 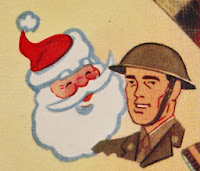 This time of year, mailboxes are inundated with catalogs urging us to do our holiday shopping quietly and conveniently from the comfort of home.  And apparently, that was the case during WWII, as well, despite paper rationing (and no internet, either).

Tom came back from a recent auction with a box lot of various paper goods, which he bought primarily for a Rookwood Pottery pamphlet that was in it.  But what I fell in love with was a group of Christmas catalogs from the early 1940s--and specifically, several from two department stores in Lancaster, Ohio: Wiseman's and Hammonds' (click on the pictures to enlarge them and read the catalog text, if you like).

It's interesting to see how the war impacted gift options.  The only catalog that has a specific date is this first one for Wiseman's from 1941--a Christmas that came less than three weeks after the attack on Pearl Harbor that led the US to enter the war. 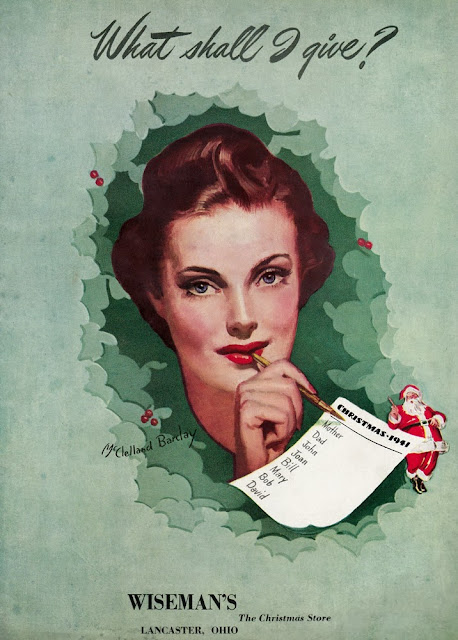 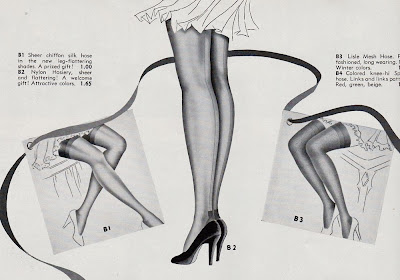 But not once the war was in full swing, and silk was requisitioned for parachutes and other military uses: 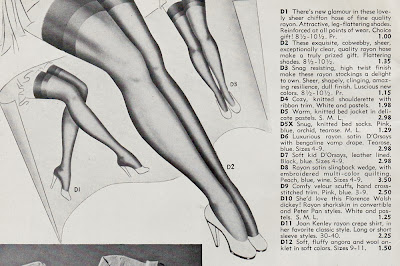 --according to my mom, despite the glowing descriptions here, rayon stockings were awful, baggy and wrinkly…which is why many women opted to use leg makeup and draw lines up the backs of their legs during the war instead.

Wiseman's later (undated) catalog illustrates, literally, some of the other changes the war effected.  The cover is a glorious, full-color combo of Christmas and patriotic iconography… 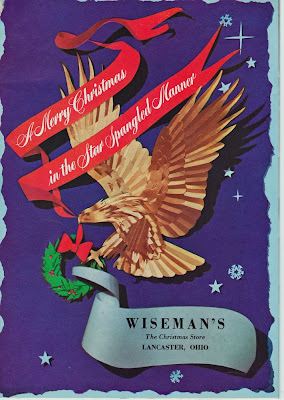 And the offerings include such military-inspired children's toys as the "Little Officer's uniform" and a sailor doll. 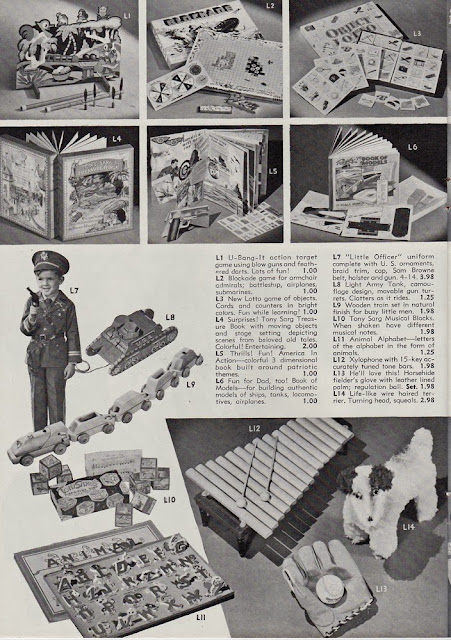 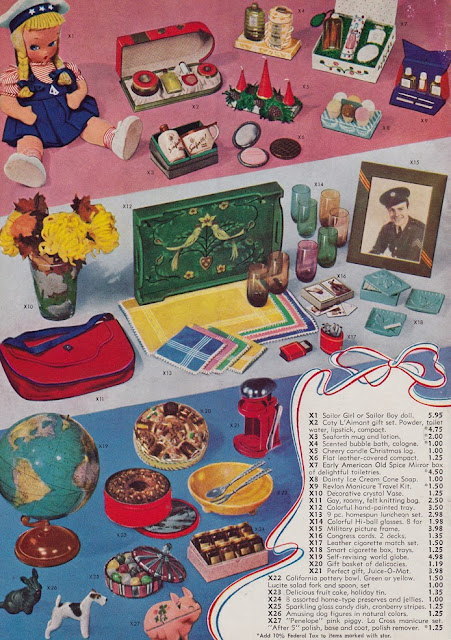 For your son, brother, friend or beau fighting overseas, the catalog included a whole page of "Service Men's Gifts." 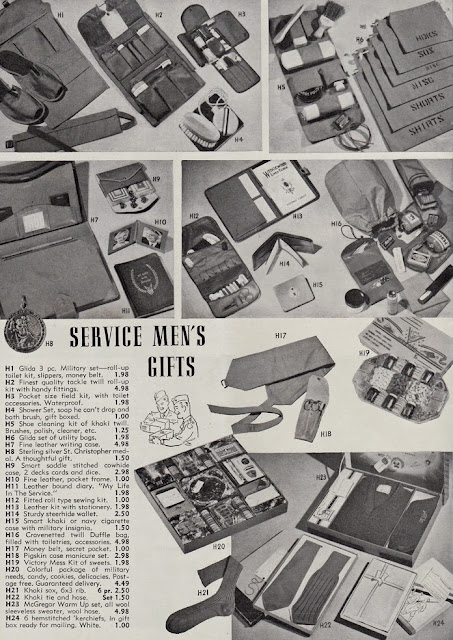 But even with all these choices, Wiseman's warned customers that not all items might be readily available: 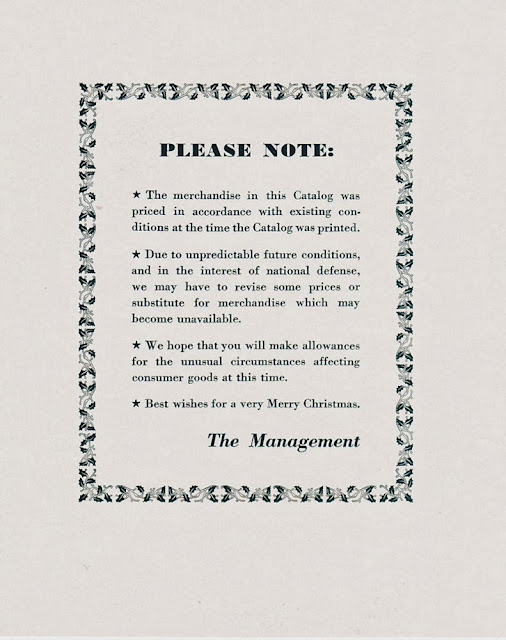 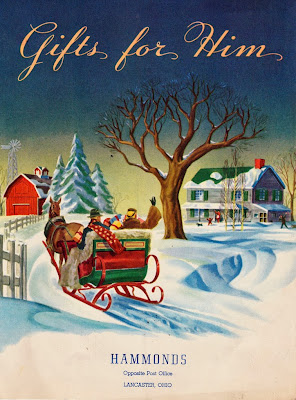 There's no text or specific references to the war here, but every page of the catalog features an insert of Santa with a figure from a different branch of the service, including the WACs: 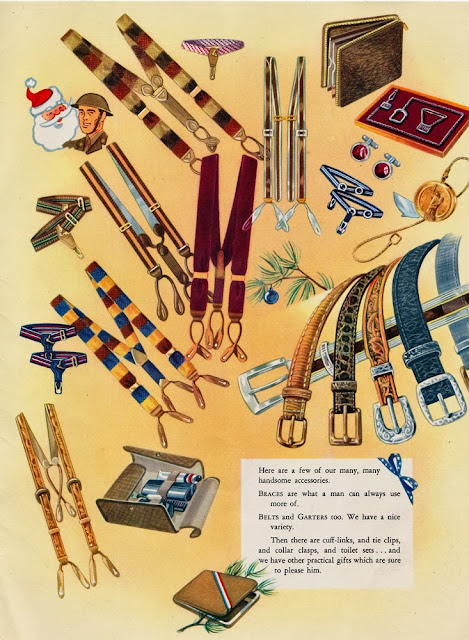 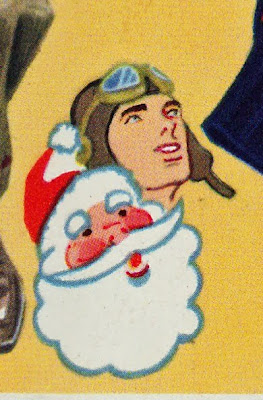 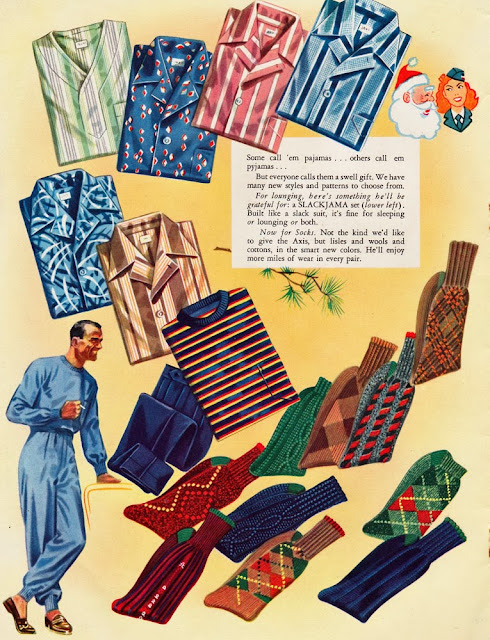 These catalogs offer such a lovely, intimate insight into life during the war--the sense of people trying to continue their usual holiday traditions, of businesses trying to make the best of a time of hardship and rationing, of everyone's yearning for normalcy.  I doubt that FDR urged people to go shopping to help the war effort, unlike a more recent President did.  But clearly, retailers were putting a patriotic spin on shopping even then.

Stay tuned for more items from this box of ephemera in future posts!
Posted by Rosemary at 8:10 PM No comments: