I come from a family of collectors, I have to admit, and one of the pieces of wisdom passed down to me by my collecting parents was the following: to have a collection you must have no fewer than three of something. If you only have two of something, I guess it's just clutter.

Elsewhere here on Romantoes, on the "ephemera" blogs, readers can see parts of one of our collections. My most recent collection (it just reached the critical size) consists of a collection of glass canes, the Ohio-valley glassworker's preferred version of that old folk-arts classic, the hand-made walking stick. The joke of the glass cane, as I hope to explain one day (who isn't always happy to have a joke explained to them?), is echoed in two other classics of glassworker's folk-culture: the glass hammer and the glass chain.

But really, the whole purpose of this blog is to encourage our numerous regular readers to chime in: so tell us, what's your latest collection? What have you acquired recently that lifts a couple of useless pieces of clutter to the much more valued status of a collection?
Posted by Tom at 7:26 PM 1 comment: 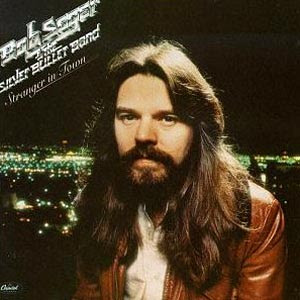 I don't think I've mentioned here how much I hate Bob Seger. Mike blogged recently about the songs that trigger an autonomic push of the radio scan button, and for me, any Bob Seger song has the same effect. It's hard to link my response to any single thing about his music; I just think he is and always has been overrated, to continue a thread Jim started on his blog.

Because I don't often hear a Seger song all the way through, I was dismayed this morning when the usually ignorable background music at Kroger's started playing "Against The Wind."

Since I still had shopping to do and couldn't sprint for the self checkout, I had to endure this sentimental claptrap as I perused the bread aisle...but then, to add insult to injury, a guy in the next aisle over started singing along. Loudly, and quite emotionally.

Now, this guy had a decent tenor, and since one of the reasons I hate Bob Seger is that while I despise his songs, they always get stuck in my head, I figured: hey, maybe my fellow shopper thinks that singing the song while it plays will exorcise any urge to hum it later. But he really seemed into it, like this was a song that meant a lot to him thirty years ago when it was first released, and hearing it opened up some deep pocket of grief right there in housewares.

And I think that's what irritates me about Bob Seger: he's really just as mawkish and bombastic as Air Supply, but he has this kind of macho credibility that I don't get. And don't give me that "He's a great songwriter" bit. I mean, this is a man who wrote lyrics like "She was a black-haired beauty with big dark eyes/And points all her own sitting way up high/Way up firm and high."

That has to be one of the yukkiest metaphors in all of pop music.

But if you must, here it is. You can even hold up your damn lighter if you want.


P. S. Jim, I know that in saying this I run the risk of subjecting Bob Seger to the Curse of the Overrated. But maybe that's just your superpower.
Posted by Rosemary at 9:28 PM 13 comments:

Back for another fifteen-week run, right here in Morgantown! Reservations not required, and there's no two-drink minimum. (Weekends and holidays excepted).
Posted by Tom at 6:46 PM No comments:

Email ThisBlogThis!Share to TwitterShare to FacebookShare to Pinterest
Labels: tales from the classroom

The cat days of summer

Here's a clue: they're nothing like the dog days, as far as I can tell.

The kitties are a mess. The colds they had when we got them have turned into upper respiratory infections, for which they're taking antibiotics, and now they have ringworm, so they're coated in a greasy antifungal goo. Better still: the spores can stay active for up to 18 months, so experts recommend steam-cleaning all carpets, upholstery, and curtains, and dousing every other surface with a dilute bleach solution. And did I mention that humans can get ringworm from cats? So now every time I have the slightest itch, I'm sure that I, too, am about to raise my foot and try to scratch my ear off. 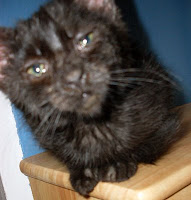 We're trying to dwell on the positive: they seem unphased by any of this--are still running around and wrestling with each other and eating like small horses. But honestly, this is not what I bargained for when we adopted these babies. I feel horrible even saying that, but, well--let's just say I'm sending out props to all you real parents of real children who nurse them through illnesses and clean up after them with nary a thought. At least I can shut these two in the basement when they get too skanky.
Posted by Rosemary at 4:25 PM 3 comments:

Email ThisBlogThis!Share to TwitterShare to FacebookShare to Pinterest
Labels: cats

Yesterday was the annual "World's Greatest Garage Sale" here in Morgantown, which is actually held in a multi-story parking garage downtown. On the radio they said there were 90 vendors there, though as you might expect, not nearly that many were worth a close look: lots of people selling country "crapts," as I like to call them, and many local volunteer organizations raffling chances to win gas cards.

But, if you recall our previous post, you won't be surprised to know that we got sidetracked by the ephemera. Tom scored with a $10 box full of dance cards from the late 1920s and early 1930s.

They're all from dances held at West Virginia University by various organizations--fraternities and sororities, of course, but also the campus ROTC unit and, my favorite, the General Engineering Society. The cover tells the tale: "Engineers' Dance"...though in my opinion, it should read "Engineers Dance?!" 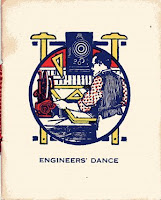 The interior is equally amusing, with various dances named "Perpetual Motion" and "Oscillator," and the request that attendees check slide rules at the door. That engineers had a twisted sense of humor, I knew. But that they dance? Well, I guess they did in 1927, anyway.

The cards name the featured bands, too, including those with such school-spirited names as Al Mabey's Old Gold and Blue Orchestra and Overt Halloran's Merry Mountaineers. But the group I'd love to have seen live is Bob McGowan's Syncopating Pirates.

A couple decades later, my dad's own dance band, Dave Hathaway's Tophatters, would be featured on such cards. He paid his room and board through his undergraduate and graduate-school days at WVU gigging around Morgantown. I recently saw a postcard from the late 40s that he sent out to advertise his band, which I'll try to post later.

It's easy to look at these cards and see them as remnants of a much more elegant and mannerly past, and to wonder about the woman to whom this collection might have belonged...was she happy to dance with "Mutt" and "Speedy" at the Engineers' Dance? Are the first and last dances marked "XXX" because the guy was so hot she couldn't mention him by name, or because she planned to arrive late and leave early? But I also know that until the late 1960s, women at WVU were kept to a strict curfew and not allowed off campus for any reason without written permission from a parent. So, I have to temper my romanticism with a dose of reality.

Still, I love these darned things, and wish I could dangle one from my wrist and use the tiny little attached pencil to write in the name of the unfortunate gentleman who gets me for a fox-trot partner.
Posted by Rosemary at 1:20 PM No comments: 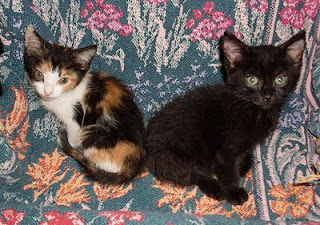 As faithful readers might recall, we lost our darling old cat, Lucy, in March, just a month shy of her 21st birthday (and damn, we were getting all ready to take her out for a night of tequila shots).
As hard as that was, I knew I'd be sucked into pet ownership again before long, inevitable heartbreak and all. We looked at the shelter and the foster home's offerings a couple of times before we finally picked out two littermates this week and brought them home.
The black one, Stella, is a tubby little ball of energy. The calico, Pip (short for Pipsqueak--aka Pippa, Pippi, Pipperoo, The Pipster) is a little less rowdy, since she still has a bit of a cold. But we're loving having them around...even if it is odd to have cats who actually jump and can hear!
Posted by Rosemary at 1:38 PM 5 comments: