The Brits have a bad reputation, food-wise: Americans either imagine that English food is blander than bland, or they think of the ubiquitous celebrity chef Gordon Ramsey and his aggressive snobbery.

For sure, the first time I visited the UK in 1987, the food lived up to stereotype: there were potatoes at virtually every meal, and when I got home I couldn't get enough spicy food. When Tom and I made our first trip to England together ten years later, in 1997, "Cool Brittania" under the recently elected Tony Blair was experiencing a food renaissance: the BBC seemed like it was airing nothing but cookery shows, and the bookshops were full of recipe books for all kinds of ethnic cuisines.

Things have only come further since then, and now it can be hard to find "traditional" British food, though the full English breakfast is still de rigeur. The last several times we've visited, we've opted for "self-catering flat" accommodation, and have cooked for ourselves. This includes the odd pleasures of British grocery shopping.

Here in Cambridge, we tend to split our shopping between the local market and one of the chain supermarkets like Sainsburys, Tesco, or Waitrose. Tonight's dinner is the result of such a mashup: leek and potato soup and salad made with things from the market square, a roast chicken from Sainsburys, heritage potatoes from Waitrose, and local asparagus from the town market, followed by local stawberries with single cream.

There are some groceries that are easily available at pretty much every shop that you'd have to go out of your way to find in the States, if you can find them at all. For example: Balsamic glaze in a squeeze bottle; single cream (thicker than whipping cream, less thick than double cream or clotted cream, all of which you'll find on the dairy shelf here); blackcurrant jam; multiple varieties of asparagus; fresh herbs, including lemongrass, that don't cost an arm and a leg.

Brits are heavily invested in local and organic food, and in a much more mainstream way than most places in the U. S. Organic products are readily available, and usually only at a slightly higher cost than the conventional product. I honestly don't know if a chain like Whole Foods would succeed here, because between the local market (which operates everyday in Cambridge) and the chain stores, there's no lack of organic and fresh food.

So, maybe it's time for us to abandon our stereotypes about English food and instead take a page from their cookbook. 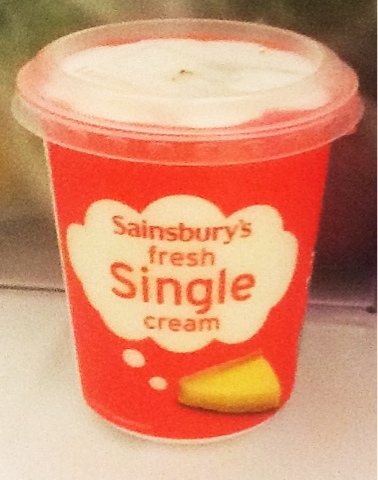 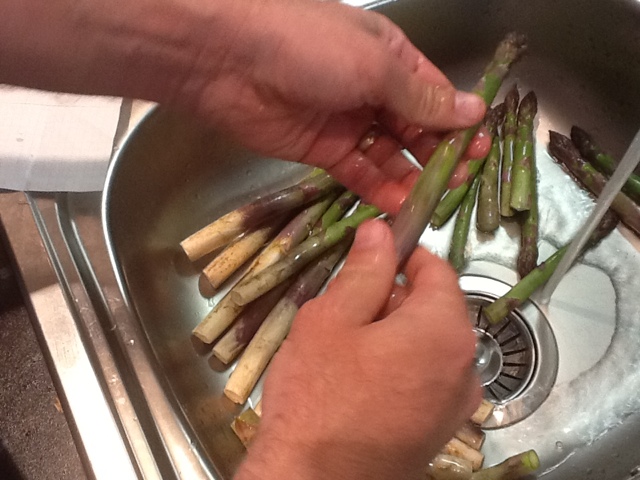 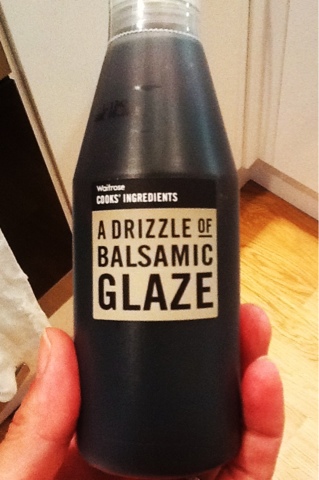 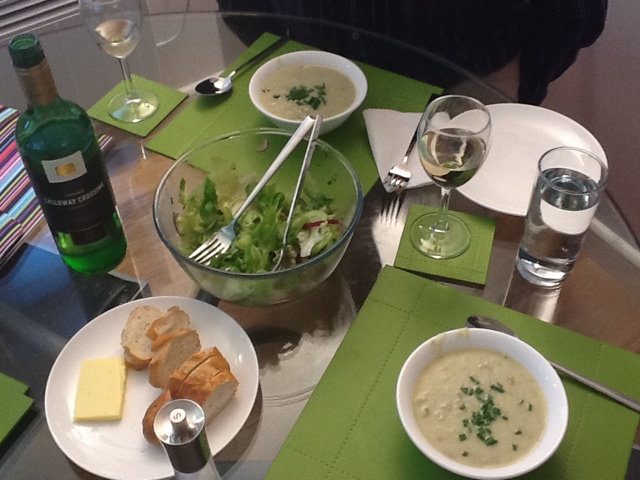 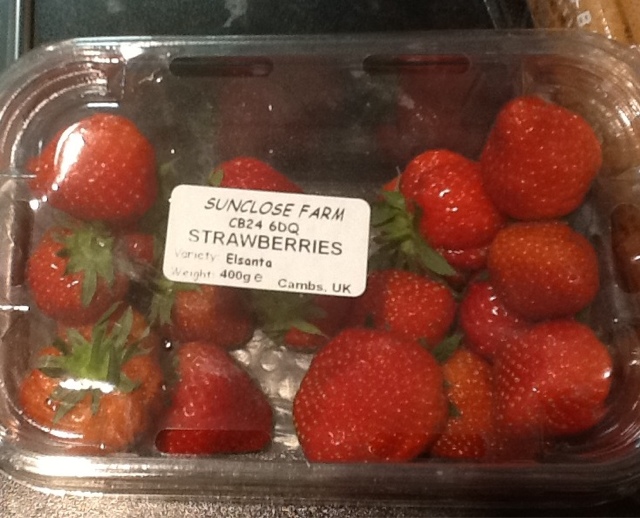 Posted by Rosemary at 4:40 PM No comments:

Chice are going to England

A couple of years ago, I was having a very hard time both sleeping well and sleeping enough.  So I started taking Benadryl (or, actually, a generic equivalent) at night to help me sleep, and then this spring, I started taking two pills a night: it's made a big difference, and I get a lot more full nights of sleep now.

For better or worse, the Benadryl doesn't really seem to alter my dreams: I still rarely remember having any, and while I don't recall any recent alien-invasion dreams, I never did have them very frequently.

This morning, for whatever reason (Rosemary diagnoses the reason as anxiety: you can be the judge), I work up with a very clear memory of parts of a dream I had.  In the early part of the dream, I was somehow working as an Antiques Roadshow-style appraiser, where I was supposedly the specialist in identifying medieval things: I remember conducting one appraisal (in French, of course) for a small grouping of children's stuffed-cloth toys, printed on the cloth to look like pea-pods filled with peas.  I told the disappointed owner that they appeared to date from about 1890, and thus were definitely not medieval: I specifically recall saying: "look how these images are printed: if these were medieval we'd expect to see them look more like woodcuts."

Somehow, later in the dream, I was working with a group of students, and for some reason I needed to persuade them of the quality and value of their knowledge of the English pronoun system.  "Who knows all the forms of 'I'" I asked.  "I, me, my, mine?"  Everybody raised their hands.  "Who knows all the forms of 'you'?" I asked and followed it up with "he," she," we," and "they."  Everybody knew them all.

Then one student piped up with a question: "What about 'chice'?"

Of course I was dumbfounded.

"Chice" I thought; "what the hell is 'chice'?"  But, in that dream way, all the students were looking around and nodding.  "What about 'chice'?" seemed to be a question on everybody's minds.

So I started in on a spiel: "Well, there's an old saying," I began, "that there's an idiot in every crowd, and maybe I'm the idiot here--but I've never heard of 'chice.'  What kind of pronoun is it?"  Of course, there wasn't much clear answer forthcoming, until one student brought me a grammar textbook of some kind, and there was "chice" printed right in black and white in the middle of a table of English pronouns.

Of course when I saw it on the chart I recognized it right away as doing the work of the Old English dual pronouns like "wit" (= "we two" or "you and I"--a kind of plural that can only include two members).  Naturally, I started in on a kind of historical explanation, but with the problem of "chice" apparently solved in my own mind, I woke right up.

So: there it is--antiques and valuation, English linguistics, the value of knowledge about medieval matters and Old English.  I guess that's what's on my mind these days.

But I think Rosemary and I may be using sentences like "Chice are going to England" for the next few days, perhaps.  Wish us luck! 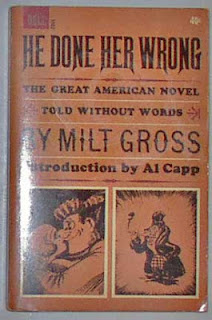 Last Fall, when I was wrapping up the comics course, a student asked me what the first comics I ever read were. I hemmed and hawed for a minute and said I'd have to give a three-part answer. First, I remembered reading the occasional Archie or Richie Rich comic book when my brothers and I were kids, though I have no idea where they came from; we never had superhero comics to read, that I recall. Second, I remembered loving Milt Gross's He Done Her Wrong (in the 1963 Dell paperback edition); I taught He Done Her Wrong in that class, so the students knew just what I meant. Third, I recalled how thoroughly my brothers and I had read the old Mad Magazine paperback reprints my dad had kept from when he'd bought them in the early 1960s: we read those books over and over, until they were probably entirely worn out.

For those of you who don't know He Done Her Wrong, it's a brilliant 1930 (almost) wordless comic (and comics) novel, telling the tale of a Great Northern woodsman, his flapper girlfriend, and the slimy, mustachioed villain who aims to break them up. The woodsman chases the villain and the girl to New York City, various adventures and misadventures are had by all, but ultimately the hero gets the girl, is discovered to be the heir of a lumber magnate, and the villain's most dastardly plan is stopped by the timely intervention of a friendly moose. It's brilliant and hilarious and it deserves to be better known. 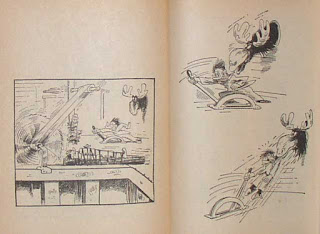 But I assume everyone knows about Mad Magazine. The 50s Mads that we read were reprinted in The Bedside Mad, Mad in Orbit, and Son of Mad (and there must have been a fourth volume we had, I think). These old Mad stories have, in the meantime, become recognized as classic, influential comics, fueling virtually the entire Underground comix movement of the 1960s and 70s, and cited as a formative influence by major figures like Art Spiegelman, among others. 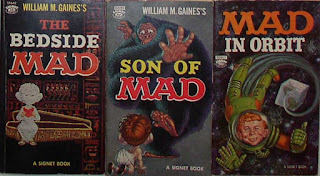 Over the years, I've picked up my own copies of these books, and I glanced through them recently and could hardly believe just how much of them had remained—somewhere—in the back of my brain. 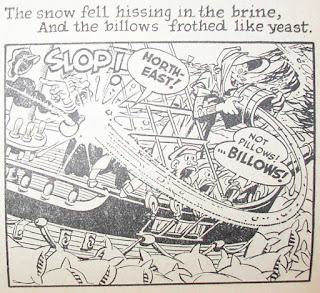 Any number of lines, I am sure would easily count as 'kernel stories' among me and my brothers: “Bumble—fumbled” and “Plastic Sam” and “Billows, not Pillows!”

This last phrase, from the Mad comics version of Longfellow's “The Wreck of the Hesperus” echoes in my memory as much as certain lines of the poem (“Last night the moon had a golden ring, And tonight no moon we see” says Peg-leg Popeye to the captain). 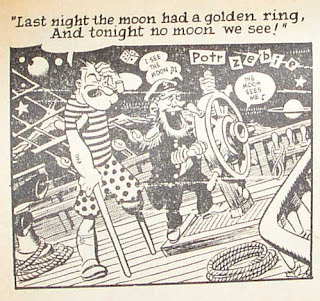 And I have to confess—I know this poem only from this version, and I really can't imagine it without the Mad panels, which make the tragic, sentimental story into a comic romp, complete with an amazing formal passage without drawings at all: comics without pictures, a perfect counterpoint to Gross's wordless novel. 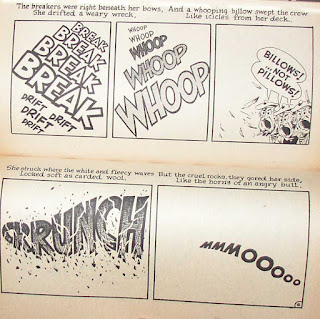 Thirty-five years ago, when I was reading these books for the first, and second, and umpteenth time, I had no idea what sort of impact they would have on me, even though I know that then I didn't get all the jokes. But having recently written extensively on the necessity of seeing as well as reading, I can't help thinking that it was the dense joke-packed illustrations of these old comics that trained me early to look closely at what I was reading.

It is often said that collectors are driven by the powerful force of nostalgia, and I usually don't think that's at all what's behind my kind of collecting. But I have an affection for these books, and even for “The Wreck of the Hesperus,” that can't be explained in any other way.