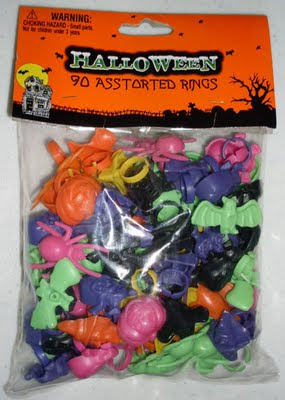 In an effort to hand out something seasonal, in addition to candy (knowing that kids would mutiny if they didn't get candy, too), we bought this bag of silly plastic rings at our local Big Lots. Spiders, pumpkins, bats...

But wait--what kind of rings are these?

"My! What Toast": Art that Makes us Happy

We sometimes shop the local antique malls and flea markets, where I am usually looking for one sort of thing and Rosemary is looking for something completely different. But once in a while we find something we both fall in love with, like this Kew-Bee Bread painting, with a guy who looks like the Monopoly millionaire.

My! What Toast! Sometimes I think that we should buy original art more often--we could use a few more things on the walls--but (frankly) I don't feel like I know anything about art. But this monocle-wearing guy is so delighted with his toast, and the colors are so bright and happy, that we knew right away that it would make us happy to see it hanging on our wall every day, and it only cost a couple days' salary-equivalent. It almost feels like the money can buy us a little happiness--or at least a happy feeling now and then.

I was especially happy to buy this painting because we already had two other examples of commercial art that we bought while we were in Colorado, two slightly earlier automobile advertising paintings, in awful 1970s avocado mattes that I haven't gotten around to replacing, because a decent frame will cost more than the paintings themselves.

I've always loved the Maxfield Parrish-esque look of the Buick painting, but the 1920 Eight-Cylinder King painting shows a group of women, including the driver, conquering the Rocky Mountains in their stylish frocks and bonnets. "Most Powerful Car in the World."

Just our luck, I guess, that all three paintings have wide, horizontal compositions, about three feet long in each case, which makes them a bit difficult to hang on the wall. But three makes a collection, I guess, and good things come in threes. And maybe these aren't real art, since they so clearly do come under the heading of commercial illustration. But they are real to us.
Posted by Tom at 6:06 PM 2 comments:

As I think I've written here before, I don't think that I usually remember my dreams. But I've had to realize over the last few years, I think, that I have a recurring dream in which my primary mode of locomotion is hopping on one foot.

Undoubtedly, my other leg is asleep or something, and my dream is just my mind processing some sort of physical sleep phenomenon. But it's fascinating: it has taken me a surprisingly long time to realize that this is actually a dream, because every time it happens, I feel like the dream is actually real. So each time it happens again, I just feel like I'm experiencing a very familiar series of real events, in which hopping is just how I get around.

(Oh, and by the way, I hop around because my other leg is cramped up, or twisted up like a withered limb, and sometimes the bad leg actually hurts: it's these things that make me think that what's 'really' happening is just that my leg hurts in a non-dream way.)

But anyway, I just think in my dream “Oh, yeah, hopping: that's just how I do it,” and it seems real.

And anyway, sometimes when I'm not paying any attention to whatever the hell is happening in my waking life, I remember these dreams like real memories, and I think, in a kind of half-conscious way, “Wow, today I can get around fine without all that hopping. That really is a pain when it happens.” Then I stop myself, and I remind myself that I can't recall a single time in my waking life where I really did get around by hopping because my other leg was a withered limb. At least I don't think I can remember any—and I always feel a little uncertain, because the dreams seem so much like memories.

And even more: my hopping has some special dream properties: I can take some really long hops, where, really, I just float across the ground for eight feet, ten feet, twelve feet, maybe twenty or more, and then I can just kind of put my foot back on the ground and take another smooth, low long-jump hop. And I have the feeling that if I just didn't put my foot back down, I'd keep gliding along. I always hear that flying dreams are among the most common dreams, and maybe this is my kind of flying dream: low, slow, close to the ground, and requiring regular effort to keep moving along: it's probably the kind of flying dream I'd have, after all.

In some of the fantasy novels I've been known to read, dreams give one access to a kind of real alternate world, where unicorns get devoured by wolves and things like that. In my fantasy dream world, I get around by hop-floating. And in that world, it's totally normal. Somehow, I don't think there's a best selling fantasy novel in there. Too bad.

But for today, I guess I'm just as happy I'm not in a hopping dream, and I'm vaguely comforted that the next time I am, it will seem familiar, comfortable, and right.
Posted by Tom at 3:35 PM 1 comment:

I was working at the dining-room table this morning when the doorbell rang; it was the mail carrier, who needed me to sign for a package. He handed me the rest of the mail and I flipped casually through it--the usual bills, junk mail, magazine-subscription renewal forms, and then...one thin white envelope, addressed by hand.

I had a fleeting moment of sheer pleasure--a real hand-written letter!--until I saw the return address: the Colorado Department of Corrections.

It was from a former student of mine--one of my favorite students from the university I used to teach at, actually--with whom I'd kept in touch for over a decade. I'll call him M.

M. had been in the very first folklore class I taught at my previous job, and was one of those people who develops an instant passion for the subject. At that point, he was a naive enough undergrad to ask me quite seriously as we were about to start on the folklore collection project whether one needed a license to do fieldwork. He was so earnest I couldn't even laugh. But it endeared him to me forever.

Over the years and long after he graduated, we kept up a steady e-mail correspondence. M. is one of those people who seems to get every joke, urban legend, and chain letter sent to him, and he faithfully forwarded them on to me, since--ironically--I'm not one of those people. We'd often write back and forth about the context in which he'd heard a joke, or the differences between one variant of a legend and another.

About four years ago, M. decided to go back to school to get his master's degree in education and get certificated to teach high-school English. I wrote him a gushing recommendation letter, and our correspondence widened to include discussions about English education. Always tech-savvy, M. was interested in the remarkable facility students had for code-switching back and forth between text language and standard English, and we had lots of interesting discussions about ways that might be incorporated into the classroom.

We lost touch for a year or two around the end of my time in Colorado and my move to West Virginia. Then a year or so ago a student here e-mailed me a legend that reminded me of one M. had sent me years ago, but with an interesting twist. I dug out M.'s e-mail address and forwarded it to him. I figured by this time, he'd have settled into a full-time teaching job somewhere, so I asked him how things were going and said that I had no doubt he was doing well, since he had so much promise as a teacher.

The message I got back left me stunned. The previous spring, a student on the cross-country team he coached accused him of sexual assault. He'd been summarily fired and brought up on criminal charges. It didn't look good, he told me.

I had no doubt then, and no doubt now, that M. did not commit the crime he was accused of. I know him well, and it is just out of the question. I wrote a letter to the judge in his case to vouch for M.'s charaacter, and to plead for leniency.

Over the last few months, I've heard from M. occasionally, and he steadfastly skirted the issue of how things were going. I know he was trying to protect others from his misery, but I felt anxious for him.

So. The letter today was from him. In it, he explained that his lawyer told him he'd be better off making a plea agreement than going to trial. Instead of granting leniency, the judge handed down the maximum sentence: 12 years in prison. Though he's eligible to be in a minimum-security facility, overcrowding in those places got him sent to a medium-security institution over three hours from Denver, so he has very few visitors. He's hoping his case will be reconsidered. He told me he plans to study prison lore as a way to stay focused.

I wanted to throw up when I finished reading. But I had to go in to work in the advising office, where a mopey-looking student told me he was sad because his favorite NFL team lost yesterday. I wanted to slap him upside the head. At least he could walk out the door into the blue brightness of a beautiful October afternoon. At least he'd been rejected from WVU's teacher-education program, so he'll never have to worry about his life being derailed, and his freedoms taken away, for something he didn't do.

Since the letter was addressed to Tom, too, I left it on the table. When I got home, Tom greeted me with the same look of shock and horror I'm sure was on my face after I read M.'s letter. We talked about how scary it is that everything can be taken away from you so suddenly, how quickly life can devolve into a total nightmare, and a lot of other things that will all sound too banal if I try to put them into words.

But I'll tell you: I feel sobered and cynical in a way I never thought possible--and I'm here on the outside.
Posted by Rosemary at 6:51 PM 5 comments: