One of the things we miss about our old place is the fact that we could walk to the grocery store from our house. Here, however, unless we want to buy some staples at the dollar store (spaghetti, say, or ranch dressing), there's really no kind of grocery store in walking distance. And there's not much in biking distance either, though there's a Kroger's in one direction and an Aldi in the other.

The only time we ever bought any groceries while we were out on the bikes, in fact, was at the Aldi, when we bought some hot dog buns after riding down the Mon River Trail. It's just about the only thing we've ever bought at the Aldi here in Morgantown.

The first time I was ever in an Aldi, on the other hand, was in Germany: Rose and I were driving around and we decided to stop in at an Aldi and get some bread, cheese, and some other basic food items, and also some toothpaste, because we'd run out. So, there we were, looking at the odd selection of toothpastes in the German Aldi, no brands we recognized, and finally decided on a tube of "Eurodont": it was cheap, but as we said at the time, "How bad can it be?"

Well, within about two days, we'd crossed the border and gone to another store to buy a tube of Dutch Crest: the Eurodont (now referred to as "Euro-don't") was so unpalatable that we literally couldn't stand it. And it wasn't even the kind of taste where you can say, "Well, it's bad tasting, but it's gotta be good for you." It was our last visit to an Aldi until Morgantown.

And somehow, biking distance or not, we really haven't wanted to buy much at Aldi here, either, although there always seem to be plenty of folks in there doing their shopping. But that Eurodont was some bad stuff. The joys of Globalization.

Email ThisBlogThis!Share to TwitterShare to FacebookShare to Pinterest
Labels: days out, true stories

Recent entries on this blog would suggest that I'm a huge proponent of change. Well, that's certainly true at the global level, but on a more personal level, I continue to be astonished by the miracle of things that don't change--or rather, change so gradually and so organically that their growth can easily escape your notice.

It's been at least thirty years since Christina, Kristin, and I first met at Mrs. Wilcox's house, where fifth- and sixth-grade band members from our hometown's three elementary schools practiced during the Carter-era energy crisis. The public schools were operating on what they dubbed the "Viking Schedule," which basically meant that the physical school buildings were closed for weeks at a time during winter, and all extracurricular activities--like the band--were farmed out to willing homeowners, god love them.

Christina and I struck up an acquaintance that blossomed into a full-blown adolescent "frenemy-ship" when we all started attending the same junior high the following year. Specifically, Christina and I became enmeshed in a (mostly!) friendly competition to see who could get the highest grade in Mr. Chappelle's 7th-grade English class. At the end of the year, I learned that Christina was going to London on a family trip, which prompted me to write the following letter: 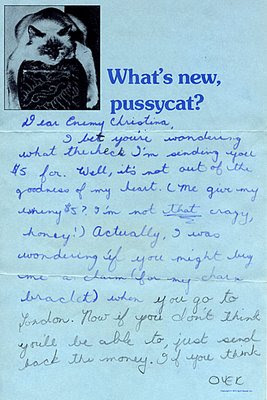 Wow, was I a bossy 12-year-old, or what? This letter goes on for quite awhile, providing specifics about the charm in question and hypothesizing about several other scenarios that might play out with the $5/London/charm mission. You may recall that Christina has served as the official friendship archivist for these 30 years. On the occasion described in the preceding link, she re-gifted me with the "charming" letter you see here, which I remembered but hadn't seen since I sent it. It ends as it begins:

Though I can't find it, I'm pretty sure I still have the postcard that Christina sent me in reply: a photo of the chopping block in the Tower of London, bloody hatchet and all, with a note reading "Wish you were here so I could chop your head off," or something along those lines. Needless to say, after this epistolary exchange, a life-long friendship was born.

So, Christina, a very happy birthday to you! Here's to at least another three decades of accumulated memories.
Posted by Rosemary at 8:42 AM 4 comments:

Actually, I'd like to have that $1,693.62 right now, since I just got a bill for some masonry repair that's only about fifty bucks less than that. Where do I cash in?

The "What is your blog worth?" analyzer is just one of the blog-analysis tools linked on the LibraryBytes site, along with a "Typealyzer" (analyzes your blog's Myers-Briggs type--this one's an ESFP) a Genderanalyzer (ours is "gender neutral" and proud!), and a Readability Test (not so sexy).

So, all you fellow bloggers: check it out and let us know what your blog's type is! Why does this sound like a bad 70s pickup line revised for the new millennium: "What's your blog sign, baby?" Still, I wanna know.
Posted by Rosemary at 6:57 PM 5 comments:

Email ThisBlogThis!Share to TwitterShare to FacebookShare to Pinterest
Labels: meta

This says it all

Well, it's been a frantic few days post-election; EJ from CO was in the house, giving a talk on 12th-century Flemish nuns on campus Thursday before she and Tom hopped the Amtrak for Washington for some wacky medievalists' conference this weekend.

But despite the hubub, this song has been in my head continuously since about 11 p.m. EST on Tuesday night, and most certainly since I heard it on Sirius "Soul Town" en route to do teaching observations in Fairmont on Wednesday morning. Coming over the mountains on a gorgeous clear fall morning, feeling like the world might well be redeemable, this seemed like the soundtrack to a new era. And Bill Withers is a West Virginia native, to boot! 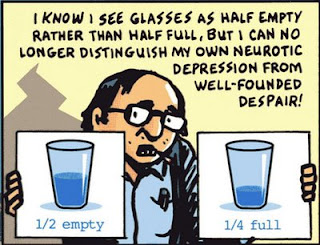 The blessed state of West Virginia has a wonderful law by which all government offices, including public schools and universities, are closed on presidential election days. Since I voted on Saturday, I went to the gym this morning, which was packed, and then went to Kroger's (site of the earlier Bob Seger incident).

As I was pushing the cart through the aisles, I felt strangely elated. Like, if some peppy tune had come on the Muzak, I might've been tempted to belt out a tune in aisle five myself, or even break into a frenzied dance.

It was such a strange feeling, in fact, that I really wondered what was wrong with me. Too much Halloween candy? Post-elliptical-machine endorphin rush? Those are certainly possibilities, but as I continued my shopping, it dawned on me: this was optimism. And I hadn't felt it so deeply in so long that it felt almost pathological.

Recently, Phillip wrote about his realization that he'd been vaguely depressed ever since the primaries. My aisle-five epiphany was that I've been feeling despondent for the last eight years, on one level or another. Simply imagining that I might wake up tomorrow morning and live in a world that doesn't seem completely hopeless was a revelation. I saw how effectively I'd been restraining myself from feeling even remotely positive that things could change, much less letting such a feeling overtake me.

So, for today, anyway, until all of this is decided, I'm going to be a glass half-full, hopeful Obamabot, and enjoy every second of it. 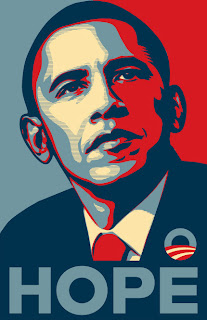 [Top illustration from Art Spiegelman's In the Shadow of No Towers.]
Posted by Rosemary at 11:55 AM 12 comments: