Only in Morgantown, Part 1

It seems like every state has its "outlier outpost," the place about which everyone says, "Only in [fill in name of town here]."

In Colorado, this was always Boulder.  Everyone who didn't live in Boulder would hear of something happening there--and it could be anything from a bid to legalize pot to protesters trying to protect prairie dogs--and would shake their heads and say "Only in Boulder."

When we moved to West Virginia from Colorado, someone told us that Morgantown was the "Boulder of West Virginia."  Now, having spent quite a bit of time in Boulder, we had serious reservations about this claim.

Morgantown is no Boulder.  There's only one microbrewery, and it's not that good, and while the mountains here are beautiful, they're not quite as sublime as the Flatirons, and the people aren't nearly as fit and happy as Boulderites.  Plus, while Morgantown may lean considerably further left than much of the state, it can in no way shape or form be considered a liberal outpost/hippie enclave in the way that Boulder can.  Sure, we have a head shop, but so does every college town (even Greeley did, for chrissakes).

Still, it's crucial to remember the second part of that statement: that Morgantown is the Boulder of West Virginia.  And therein lies the rub.

Now, I'm not entirely sure what it means to people in other parts of the state when they say "Only in Morgantown."  Most likely it's a critique of the ways in which the city is detached from the reality of the rest of the state, since it's a place where unemployment is low, property values are high, and good jobs mean more than work in the mining industry.  Last year, Morgantown got a lot of buzz for appearing to be recession-proof.

And it may also have to do with the youthful, party-oriented nature of the town, fueled by the 30,000 students who call it home for nine months out of the year.

For me, though, it has to do with a series of seeming contradictions that nevertheless seem to coexist peacefully, even productively.  So, with this post, we're inaugurating what we hope will become a recurring feature here at Romantoes, spotlighting some of the things that make us say "Only in Morgantown."

Today's case in point?  The very existence of this store, which is on a well-traveled route leading from Morgantown to Point Marion, Pennsylvania. Since deer-hunting season started on Monday, this seems like an especially good example to start with. 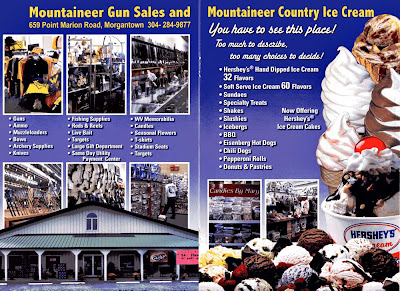 Rumor has it that one of the main reasons the university closes for the whole week of Thanksgiving is because deer hunting traditionally begins on the fourth Monday of November.  Local high-school teachers tell me that they don't plan anything major for the Monday and Tuesday of this week when school is still in session because so many students will be out hunting.  Hell, even my endodontist told me that he was taking a day off this week just to go "be in the woods" with his buddies, even though he himself doesn't hunt.

Guns and butter, I've heard of.  But guns and ice cream?  That's pure Morgantown.
Posted by Rosemary at 3:46 PM 3 comments: 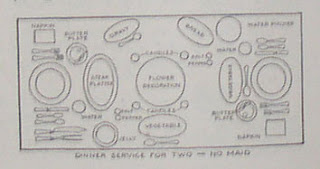 West Virginia may now be known across the world as a coal producing state, stereotyped as a place of poverty and hillbillies, but one of this region's most important exports to the rest of the country was once--believe it or not--middle class aspirations.

In the nineteen twenties and thirties, this whole area (West Virginia, western Pennsylvania, southeastern Ohio) was the national hub for industries producing glassware, china, and pottery. These industries date back even a century or more earlier here: the region's plentiful supplies of coal and gas, sand and clay, as well as the easy access to rivers (and later railroads) for transporting the finished wares made this part of the country a perfect place for these businesses. Morgantown itself had a number of glass factories in the first half of the twentieth century.

But in the twenties and thirties, glass factories and pottery factories in West Virginia and Ohio actively pursued a new, direct marketing strategy, trying to sell their wares to housewives explicitly as the material supports of an aspirational middle class lifestyle. Not only were magazines barraged by advertisements, but many of these factories produced brochures and booklets as giveaways to potential customers, and I pick them up whenever I can, although they are pretty hard to find. They tell a story very different from what we might normally think abut both this part of the country and how middle class values were sold to the country both before and during the Great Depression. 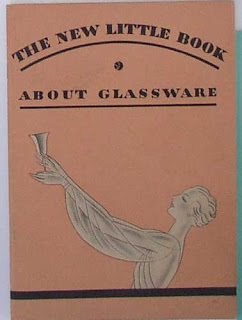 One of my favorites, for its sheer Art Deco brilliance, is the 1928 New Little Book About Glassware published by the Fostoria Glass Company of Moundsville, WV. A 40-page revision of a similar 1925 booklet (the picture at the top, from which the title of this post derives, comes from the 1925 verison), the 1928 booklet's cover shows a woman few people, I suspect would associate with West Virginia in the 1920s, and the text includes remarkable passages like the following: "No longer is it surprising to have the soup course, the salad, or dessert, the after-dinner coffee appear in Fostoria dishes." Glass is presented as a novelty: the use of glass instead of china for the entire service was a fairly recent development: "At first a complete dinner service of glass sounded like a fairy tale or a glittering dream from Arabian Nights." But a Fostoria service is presented here as analogous to a silver service, a civilized necessity for any house or home. But its essential novelty meant that the idea itself needed to be sold, and these booklets are remarkable for how they mix the snob factor of aspirational class identification with the practical matters of housekeeping: the 1925 booklet shows how to set a table for two if you don't have a maid; the 1928 revision notes "the plates stack perfectly, a point much appreciated by the homemaker whose shelf space is limited." 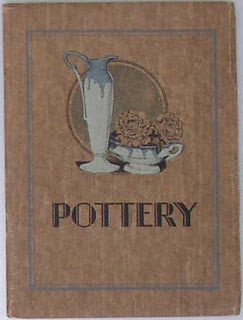 Amazingly, the beginning of the Great Depression seems to have had remarkably little effect on this marketing strategy. The Roseville Pottery of Zanesville, Ohio, printed the booklet shown at the right in 1931, and the Futura line vases shown below in the picture are especially collectible today for their Art Deco designs. Cambridge Glass (of Cambridge, Ohio) put out a booklet called The Art of Making Fine Glassware in 1939, which begins by recounting the high esteem medieval Venice had for members of the glassworking guild. All of these booklets, in fact, take education as their primary mode: the Fostoria booklets educat 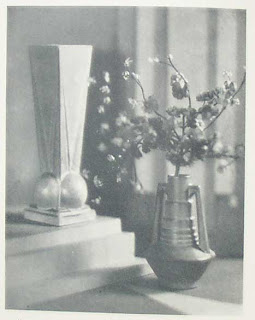 e the housewife on proper table service, even if she doesn't happen to have a maid to rely on; the Roseville and Cambridge booklets give brief histories of pottery and glass technologies and artistry in order to make recommendations for contemporary decorative uses or gift-giving. The ancient and honorable traditions of glassware and pottery are clearly held up as markers of refinement, tradition, and class. The 1925 Fostoria booklet, for example, comments upon "the conservative aristocracy of hand-blown crystal."

Glass is still being made in West Virginia, but more as a studio enterprise than a matter of factories turning out dinner plates, cups, saucers, and goblets by the thousand. These booklets--secondary products of these glass and pottery factories--seem to be rarely collected by libraries (WorldCat turns up fewer than ten copies for any of these booklets), but they tell a story of a key moment in the marketing of middle class material practices as a matter of aspirational class identity. And it's a continual surprise to me that a lot of that came from here in West Virginia.
Posted by Tom at 11:38 AM 2 comments: