Have a finger-lickin' good Halloween!

I've never been a big fan of Halloween--at least, not once I got past trick-or-treating age (and drunken costume-party age). I don't much like being scared, which puts a damper on things. But --as some of you not only know, but were witness to--Halloween does indeed mark the anniversary of Tom's and my official couple-dom. So, I guess I have to observe the occasion in some way.

Tonight we'll be heading up the hill for the un-party of fellow Greeley expat and Halloween-hater, Brian, to hand out treats to those kids with the cardiovascular endurance to venture off the flatter parts of Waitman Street.

At home, the cats will be having their own shindig, since this is Stella's signature holiday, being one of those unlucky black cats and all. Here she is, striking the traditional spooky pose (or doing her best Gene Simmons impersonation, take your pick): 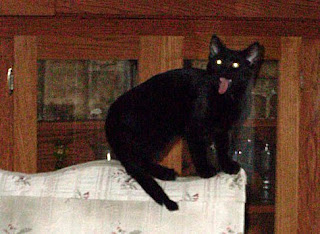 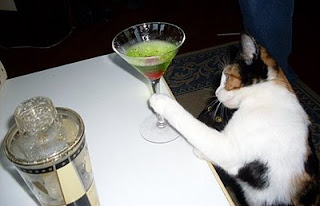 Pip, on the other hand, is working on her "cocktail-swilling society matron" getup. I think she's just about got it down.

The best costume I've seen this year, though, was last weekend in Louisville, Kentucky. Just down the street from the hotel where the conference I was attending was being held, the local Radio Disney station was sponsoring a kids' costume contest. This little guy was one of the finalists, unsurprisingly. Too bad I didn't catch him another block further down the street, in front of the life-sized statue of Col. Sanders at the Louisville Visitors' Center! 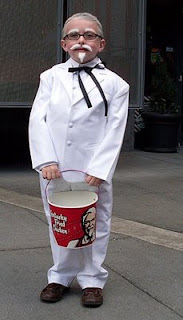 Regular readers, I hope, may recall my lament about the size of the lawn here and the all-too-frequent necessity of whacking the grass, which I wrapped up by noting that "I'll probably need to adopt some protective eye goggles. That should be a look."

How silly of me--clearly, protective eye-goggles no longer provide appropriate yard-work security, as I discovered while flipping through the latest "Improvements" catalogue that was recently delivered to our house (conveniently addressed to us "OR CURRENT RESIDENT") via the US mail.

All that is missing from the picture of the "Snow Thrower Cab" is the snow shovel attachment for it to be perfectly usable here at the new house (even as a corner lot, the sidewalks are still too short to need a mechanical snow blower, so I'll have to kludge some sort of alternate attachment system I guess).

And it says it won't shrink or stretch. Maybe I'll get a second one for the long walk to campus, too.
Posted by Tom at 8:47 PM 3 comments:

That totally explains it! (UPDATED)

For some time now, the talking heads have been wondering what happened to the "real" John McCain. You may have seen the bit on the Daily Colbert Showport, one of them, with a montage of such comments earlier this week.

Yesterday a friend posted a photo on Facebook--apparently a real one, not Photoshopped--of McCain gesturing insanely toward Obama's ass at one of the debates.

Once I got over the shock and disbelief that this wasn't a doctored picture, I remained strangely haunted by the photo...until finally, I realized why I found McCain's expression--and grabby gesture--so disturbing.

Folks, I bring you Exhibit A, the photo in question: 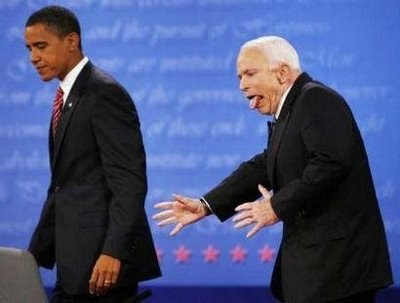 ...and Exhibit B, this still from "Hyde and Hare," the classic Bugs Bunny cartoon: 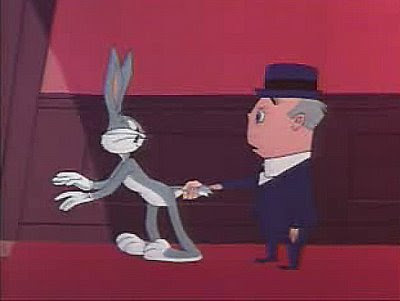 Well, there you go. McCain has been secretly imbibing a toxic potion that transforms him into a red-eyed, green-complected, knuckle-dragging psychopath! Props to whoever's doing his makeup. 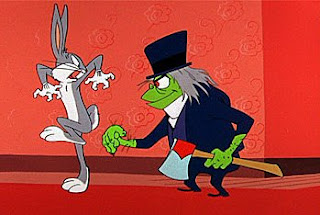 It came from the basement 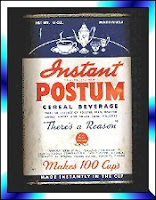 I've been reading the first set of papers for the ethnographic writing class I'm teaching this semester, in which I asked the students to research and write about a family story, custom, or foodway.

One of the papers I read today was about a dish the student's family called "cornstarch": basically, a cooked chocolate pudding of cocoa powder, sugar, and milk thickened with the eponymous ingredient and then served warm over white bread or biscuits. I'd actually heard about this dish previously--called "chocolate gravy"--from a student in Colorado whose family originally came from the South. In both cases, the dish wasn't served as dessert, but as a meal; my current student's family traditionally ate it with hot dogs.

Yeah, gross, I know, but in both cases the students traced the origins of this dish to the Depression. In that context, and especially in rural Appalachia, the dish makes perfect sense: quick, easy, filling, with a high calorie-to-cost ratio. When we study foodways, I like to remind students that the luxury to eat what we want, when we want, in any season is a very new phenomenon.

So, it's no surprise that my parents, who both grew up during the Depression, hold onto things for a long time. Sometimes this works out beautifully, like when we were watching some old home movies one Christmas and the projector bulb burned out. My dad sprung up, saying that he thought he had a spare in the basement, and a few minutes later came upstairs with an entire box labeled "projector bulbs." The show was back on.

Other times, though, this instinct is a little more suspect. Several years ago, Tom and I were visiting and decided to make a brunch casserole that called for frozen hash browns. I seemed to remember seeing some in the basement freezer, and sent Tom down to get them. When he came back up with them, I took one look and decided we needed to go to Kroger's to get a new bag: the pricetag (yes, a genuine, stick-on pricetag) was from a grocery store chain that had closed in the 1980s.

My dad also had an ancient jar of Postum in the cabinet. I mean, it had to be at least 30 or 40 years old. I'd never seen anyone in the household drink Postum, ever. I suggested that perhaps it could be thrown away, and he recoiled at the very thought: it was Postum! How could it go bad? Upon opening the jar, though, we saw that the contents were glommed together in a hard mass--not the mixable powder it was supposed to be.

No problem, claimed Dad: it could be reconstituted in some water to make a kind of Postum concentrate. Which he did. And, to prove a point, he put some Postum sauce in hot water and drank it. The jar mysteriously disappeared shortly afterward.

I heard somewhere recently that with food prices skyrocketing, people (and restaurants) are throwing away much less food, which is making things difficult for food banks and shelters. Bad for those organizations, but perhaps good for us, who tend to forget that most of the rest of the world doesn't eat like we do--especially not when they're at war. Seems to me some government-imposed rationing, like there was during WWII, might make timelines for ending the conflicts in Afghanistan and Iraq seem a lot more appealing to our more bellicose citizens.

Now, I'm not advocating digging that old Postum out of the trash can and savoring every last crusty bit with righteous frugality. But we probably could all be more grateful for the abundance we have. For myself, I hope to be somewhere near the Hathaway basement come the Apocalypse, since there's enough down there to subsist on for at least as many decades as stuff has been accumulating there.

P. S. I wish I did have that jar of Postum now: apparently, Kraft Foods discontinued it this past January, and some members of the Seventh-Day Adventist and LDS churches--which both eschew caffeine--are up in arms about it. There's an unopened jar selling on Amazon for $150...you'd think that rehydrated Postum might bring a few bucks, anyway.

In case you're still in doubt about the historio-cultural significance of Postum, check out this item from the Smithsonian's archives.

--With thanks to Historiann's blog on "retro recipes" for additional inspiration.
Posted by Rosemary at 8:26 PM 5 comments: