Not this time, I guess

A month or so ago, when I last drove through Point Marion, PA (just a few miles up the road from us here in Morgantown), I was surprised to see an all-white deer scamper across the road and up the hillside with a normal, brown-colored deer beside it. Presumably, it may have been an albino, but as the relevant threads at the "Buck Manager" website indicate, it may have only been a "piebald deer," if it had some brown spots I didn't notice. I didn't have a camera, and while I thought I saw someone else pull off the road to snap some pictures, I don't seem to have been able to Google them.

In Marie de France's Guigemar, the poem that leads off her twelfth-century collection of Lais, the eponymic main character encounters a white deer and shoots it. His arrow bounces off the deer's hoof (believe it or not) and strikes him, causing an injury. Guigemar then goes on a great journey, has a variety of adventures, etc, etc. The white deer, though, plays the role often played by a dwarf or giant in medieval romances: the magical or mystical creature that serves as kind of gatekeeper or prompter who motivates the hero's rite de passage, sending him off on the adventure or at least ensuring that he has one.

So, anyway, for the last month or so, I've been looking over my shoulder, somewhat hopefully and anxiously holding my breath and waiting for some transition that will change my life, or at least for the start of some new adventure. But a month seems to have passed, and now I guess I've had to conclude that it's not going to happen. Maybe next time I drive through there, though, I'll get another crack at the white deer. But in the romances, you only get one shot at something like that.
Posted by Tom at 6:11 PM 3 comments: 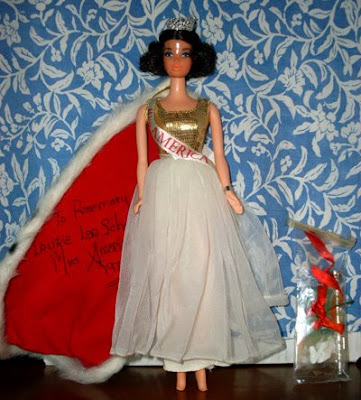 Is it a coincidence that West Virginia lawmaker Jeff Eldridge decided to submit a bill to ban Barbie sales in the state right before the iconic doll's 50th birthday? Poor Barbie can't cut a break; isn't turning 50 rough enough without some well-meaning dope trying to cut you off at the knees? Oh, wait: Barbie is already cut off at the knees, more or less.

Historiann has said about everything smart there is to say about fashion dolls, so I won't duplicate her efforts here.

But for awhile now, I've been meaning to blog about my vintage "Miss America" Barbie doll. In 1972, Laurel Lea Schaefer, a native of my hometown in Ohio, was crowned Miss America. My father and her mother worked together, so in many ways, it was my first (and to date about my only) brush with celebrity. Needless to say, I was smitten. 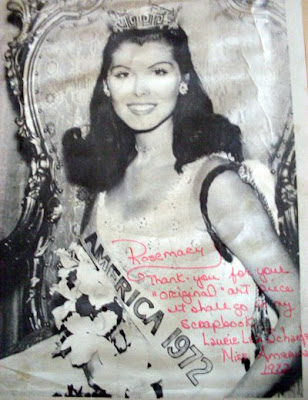 I'm pretty sure these dolls were a premium for sending in cereal boxtops--I could be mistaken--but at any rate, my parents got two: one that I was allowed to play with, and one that they kept in the box and stashed away in their bedroom closet. The one I played with has long since disappeared, and I think all the clothes got totally worn out.

Just a few years ago, my parents finally decided I was responsible enough to take the mint one home with me. As you can see, I've tried to take good care of it. In fact, I wanted to take the scepter, roses, and white shoes out of their original bag so you could get the full effect, but my collector husband advised me not to. It seems a shame, but I suppose he's right; any value it has is completely linked to the unbroken seal on that little package.

Alas, Laurie Lea never went on to any great fame, though the doll is still worth something, not only as a collectible, but as a relic of my childhood and of the 1970s more generally. As some of you know, I managed to break Laurie Lea's Miss Ohio crown several years later when some other kids and I were playing with it during a party at Mrs. Schaefer's house.

This page on the Miss America website suggests that 1972 may have been the last uncynical year for the pageant. While Laurie Lea's predecessor, Phyllis George, toured Vietnam with the USO, the woman who followed Laurie Lea won the crown while wearing a POW bracelet, and later admitted to entering just for the scholarship money and being pro-choice. In 1974 the National Organization for Women held its annual convention in Atlantic City during pageant week in protest, even as the crown went to a doctoral candidate, Shirley Cothran.

In the meantime, a classmate's mom who volunteered in our second-grade classroom had asked me if I was a "women's libber," and encouraged me to be one. My dad, upon finding out that I'd decided I was a women's libber, told me I could open the car door for myself. My mom smoked Virginia Slims. We've come a long way, baby. 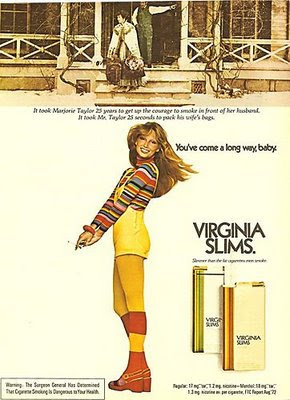 NOW's protest of the pageant was deeply symbolic and completely ineffectual in much the same way Delegate Eldridge's bill is.

What's always interested me about people's "Barbie stories" is how subversive they all are. I've never encountered a woman (or a little girl, for that matter) who's had a simple, uncritical relationship with Barbie. She is, instead, always a canvas for working out all kinds of issues, very few of which ever seem to be related to body image in any straightforward or unproblematic way.

A former colleague reluctantly gave her daughter a Barbie years ago, only to discover that she had popped Barbie's head off, since that made it easier to change her clothes.

My friend Karla and her sisters begged for a Ken doll, but their mother--fearing some kind of sex play--unequivocally said no. Ever resourceful, the sisters chose one of the old Barbies they didn't like, cut off its hair, and took it outside where they scraped its breasts off on the sidewalk, thus performing the first Barbie sex-change operation.

I'm sure you know similar stories. The reality of children's play is always vastly more complex and interesting than adults generally see or are willing to see. I probably went home and played with my Barbies the very day I told my classmate's mom that I was a women's libber.

So, Mr. Eldridge, may I respectfully request that you go out and observe some real, thinking girls playing with their Barbies? And if you really want to create some legislation that makes girls feel better about their bodies, do something about gym.

For other interesting Barbie stories, look here and here...
Posted by Rosemary at 7:00 PM 9 comments: 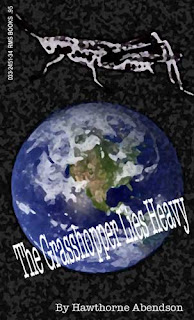 Regular readers may know that I am a notorious scourer of used bookstores, always looking for the elusive treasures that can only be found in dusty shelves, unrecognized and unloved.

For years, I've been keeping my eyes out for a copy of Hawthorne Abendson's notorious and incredibly difficult-to-find 1962 novel, The Grasshopper Lies Heavy. Written by an obscure Cheyenne, Wyoming, writer, this novel was banned almost everywhere on its publication, but it was quickly pirated and reprinted by a variety of fly-by-night outfits. Sold under the counter, used copies turn up occasionally, but I've never had a chance to read it--until now. The accompanying picture shows what looks to me like a late sixties edition (which I was lucky enough to spot today, prompting this post) printed and sold by "Rocky Mountain States Books," with a cover price of 95 cents.

Supposedly, the novel is a classic of science fiction, in which the outcome of World War II was pretty much the opposite of what happened in the real world, and the main characters make their way through that world in a kind of spookily revealing travelogue/narrative. The author, Abendson, always claimed that the book was actually written by the I Ching, in that every major occurrence in the book was the result of the author's consultation of that oracular text.

I'm looking forward to finally reading this book; hopefully, I will post a review here at some later date. Check in regularly.
Posted by Tom at 8:29 PM 2 comments:

My opportunism is a function of my pessimism 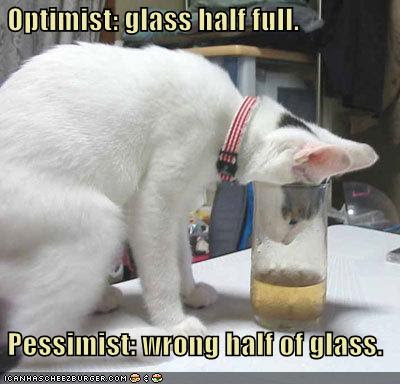 ...so a neighbor and colleague told me this morning, when I ran into him and his wife coming back from a walk just as I was heading out for one.

It's a gorgeous day here--after single-digit temperatures last weekend, it's now 72 and sunny. So, I skipped the gym, put on my hiking boots, and headed for White Park, a huge woodsy space criss-crossed with trails that's about a ten-minute walk from our house.

En route I ran into a couple who live around the corner from us coming back from the park. I mentioned that I wanted to get out and walk before it rained.

"Is it going to rain today?" they asked.

"Well, there's like a thirty percent chance of rain," I offered sheepishly.

"So," Michael said, "your opportunism is a function of your pessimism."

After years of living in Colorado, where the forecast sometimes called for rain but where, in fact, it almost never did rain, back here in wetter climes I fully expect that if the weather guy says it's gonna rain, it will. Even if he says it isn't, I figure it could still happen. I've re-learned the necessity of having umbrellas in the car and my desk drawer, just in case.

But is it true, in a larger sense, that my opportunism is a function of my pessimism?

Am I that much of a glass-half-empty kind of gal?
Posted by Rosemary at 11:39 AM 6 comments: