Who out there remembers this?

Last week Wordshed featured one of ABC's vintage Saturday-morning PSAs with "Timer," that strange, top-hatted yellow...something that--in the clip Jim posted--taught us how to make "sunshine on a stick" with orange juice. [For a stunningly complete history of "Timer," check out this Toon Tracker page.]

The spot above, though, is the one I hold near, if not so dear, to my heart. As a fat kid, I lived in fear that other kids would sing it to me. I don't think they ever did, but I certainly sing it to myself from time to timer when I catch myself reaching for the Cheez-Its for no good reason. (Which begs the question, is there ever a good reason for Cheez-Its? Probably not.)

To the claims that being "bored or blue" will bring on the Munchies, I'd also add "stressed out" and "angry."

In hindsight, the advice here is pretty on-target; certainly more so than Timer's suggestions elsewhere that we regularly eat a hunk of cheese, or have steak for breakfast. Did the scientific evidence that exercise was one of the most effective anti-depressants exist in the 70s? The recommendations here seem ahead of the curve, for once.

I'd be curious to hear from other folks who grew up in that era about their memories of both school- and media-taught ideas about nutrition. I seem to recall some sort of contest in 3rd grade where we all had to keep track of what we ate for breakfast, and the more eggs, bacon, and sausage you ate, the better you did...the idea being that loadin' up on all that protein (and fat) at 6 a.m. was a good thing. And yet, the obesity rate then was much lower, especially among children. Better to eat eggs and bacon than high-fructose-laden cereal and Pop Tarts, I suppose.


[Speaking of breakfast, my partner in blogging and I are off to the land of the "fry up" for a couple weeks...though personally, the very thought of baked beans, broiled tomatoes, and fried bread for breakfast makes me want to puke. See you on our return, faithful readers!]
Posted by Rosemary at 4:10 PM 3 comments:

Email ThisBlogThis!Share to TwitterShare to FacebookShare to Pinterest
Labels: food

The Medievalist 'Cat' Came Back 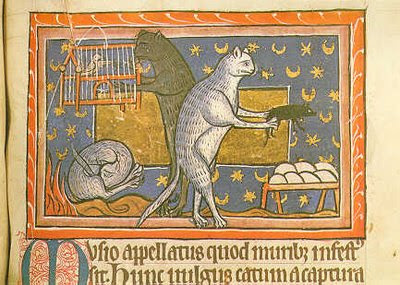 Well, I'm back from the big medieval conference in Kalamazoo, this time just a whirlwind trip where I had to hustle back here to finish my grading and turn grades in.

Here's the highlights--not in order of occurrence:

Got to see a bunch of old friends, both from graduate school and otherwise; didn't get to talk to some of them as long as I would have liked.

Went to (I believe) a total of three panels other than my own; slept in an inhospitable dorm room with some fairly unappealing facilities (but the price was right!); went to the dance (but did not dance); talked to my editor (but did not pitch a book); rolled out of bed at 6:30 and drove seven-and-a-half hours back to Mo-town.

Went to the wine hour (Gallo, paronomasiacally dispensed from gallon jugs); there was also a free tasting of (supposedly) medieval-esque meads and beers. Had a very sour sour beer and a non-hops, heather beer, which was flowery, but not all bad. Did not have the mead; two people independently described it as tasting like cough syrup.

Went to the Anglo-Saxonist dinner and sat at the smallest table, where we (supposedly) got served first. No mead here, either, but beer. Ate hobbit-fare at Bilbo's with most of the guys from my panel.

I did see a monk in full habit.

A good time was had by all, presumably. Oh, and I'm sure some academically valuable lessons were learned all around, too.
Posted by Tom at 4:34 PM 7 comments: 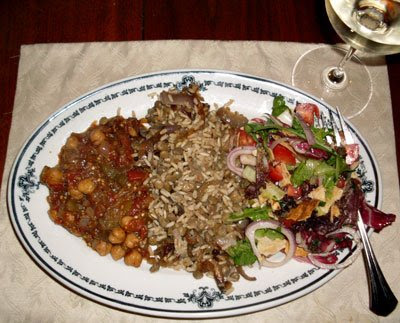 ...the mice will eat Lebanese food.

Every year around this time, Tom heads off to the big Medieval Congress in Kalamazoo, Michigan. I tagged along once, and my chief memory is of walking into the classroom building where his panel was scheduled to see a group of eight or nine Franciscan monks, tonsured and attired in their brown robes tied with rope, standing in a circle chatting. I think someone had to physically push me out of the doorway, I was so immobilized by astonishment.

After that, I've decided to stay home, which is really for the best since the Kalamazoo conference usually happens right during finals week.

To be honest, I've come to enjoy Tom's annual exodus. I usually have a lot of grading to do, so it's nice to just be able to get into a work groove and not worry about anyone or anything else. I've also developed a few idiosyncratic traditions over the years that I look forward to, such as making and eating stuff that Tom doesn't enjoy--primarily, Middle-Eastern food.

This time around, I enjoyed a much-needed break from grading by making mujadarah (lentils with rice), mussaka'ha (an eggplant, chickpea, and tomato stew), and fattoush (a salad with lemon-garlic dressing and pita bread), all from the Sahtein cookbook by the Arab Women's Union of Detroit.

The mussaka'ha and the fattoush tuned out great; the mujadarah, OK, but not as good as what I've had at Cedarlands Restaurant in Dearborn, or at the Tiger Bakery in Toledo. If anyone has a good recipe for the mujadarah, I'd love to have it; this one comes out dry and bland, and the best versions I've had are flavorful and have way less rice.

I'll be glad to see Tom when he gets home tomorrow, but the few days without him are an annual reminder of the pleasures of solitude. And chickpeas.
Posted by Rosemary at 6:07 PM 5 comments: