I think the very first blog I posted here was my story about "Shoe-Love" from the Modern Language Association (MLA) annual conference in Chicago a couple of years ago. This year, when I went to the MLA, I wasn't expecting to have any blog-worthy experiences, but that just goes to show what I know.

Anyway, the MLA is a typical (even stereotypical) literature conference, but one where I kind of like to go, because there's always a good crowd of Anglo-Saxonist regulars. I went, gave my paper, ran into a few folks from WVU, and ran into more folks who knew WVU folks, so it was also a reminder that the academic world is a small one. Had a long discussion about the importance and significance of books in Anglo-Saxon studies with an old friend: neither of us seemed too worried that we hadn't actually read the books we were debating about. Somehow, I'm not too happy about that, in retrospect.

Ran into an old graduate school friend, Stacy, who's always fun to see, and we set up a plan to go out to dinner after my paper (which was at a 7:15 session). Gave my paper (about a new interpretation of three runes, believe it or not), and got some positive responses to it. Anyway, after things wound down, Stacy and I and the chair of the panel ended up looking for a place to get a moderately priced late dinner, and we asked the concierge at the conference hotel to help us out.

After a few moments of mystic consultation with his computer, he told us he could just fit us in at a table for three at a seafood/Italian restaurant a few blocks away at 9:30 (25 minutes later). He printed out an online menu for us, he gave us some walking directions, and we left the hotel feeling lucky he had found us a place--since with thousands of academics milling around, many restaurants were filled up. But when we got to the restaurant, it was practically empty, and Stacy and Shari both expressed some uncertainty. But I said, "Hey, it's Monday evening, between Christmas and New Years--no big deal if it's not full. Let's try it."

So we went in, and the waiter asked if we were "three for dinner" and we said yeah, and he didn't seem to care if we had a reservation or not; we all thought the concierge had been kind of a jerk for implying that our table for three was like the last table available in the place. So anyway, we sat there, ordered some drinks, and the waiter ran through a whole list of specials, etc.

And while he was talking, I saw something moving around on the floor out of the corner of my eye. I looked closer, and sure enough it was a little grey mouse, scurrying around here and there. As soon as the waiter stepped away, I mentioned it to the other two (whose backs were turned to the mouse area) and we all decided it was time to leave: empty restaurant, mouse running around--two strikes was all we needed.

So we left and went to the Irish Pub, where there was a small crowd, the food was fine, and--at the end of the evening--the owner's cat wandered by our table: no mice in there, I think.

We debated going back to the hotel to give the concierge a piece of our minds, but ultimately decided against it.
Posted by Tom at 9:23 PM No comments:

Peace on earth, goodwill to all, blah blah blah 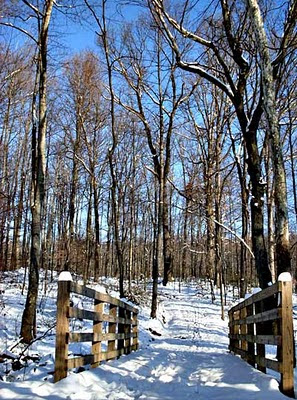 It's no secret that the last few months have been something of a train wreck here at Camp Romantoes. So it felt like a real blessing that today--a day when the tearing of metal and the grinding of gears seems finally to have quieted--dawned bright and clear and sunny.

I put on the Yaktrax I got and never had a chance to use last winter and made my usual trek over to White Park. In the two years I've been walking there, I've marked out a pretty standard route that I follow more or less every time. It allows me to be in the woods, and away from street sounds and distant houses, as long as possible. What I've grown to love about trodding the same path every time is the remarkable balance of consistency and change it provides: same path, same general scenery, and yet radically different sights every time, depending on the season and the weather and the time of day.

In the fall, it's awash with color from the maples and oaks and buckeyes in the woods; in the spring, I love to watch the gradual creeping in of green.

And in the winter, even the bleakness is somehow lovely. Especially when everything is blanketed by snow and the light and shadow are magnified by sun and blue skies. Today as I walked I thought about how it doesn't seem that long ago that I was hiking through here to see the fall color...and how, before too long, small signs of life will start to emerge. Goddamn circle of life.

Robert Frost said it best: "In three words I can sum up everything I've learned about life: it goes on." Relentlessly, mercilessly sometimes. If you're lucky, patiently and gently. In the woods, thankfully, it feels more like the latter.

So, since we're supposed to be thinking about peace and all that good s**t at this time of year, I'll leave you with a little video of the waterfall in White Park. I hope you find it even a little bit as restorative online as I did in person this morning. A peaceful season to all, indeed--and our very sincere wishes for a happy new year.

Email ThisBlogThis!Share to TwitterShare to FacebookShare to Pinterest
Labels: holidays 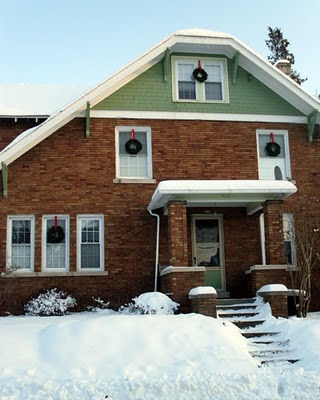 We didn't get hammered here as badly as folks further south and east did, but we still had a good eight inches of snow between Friday night and Saturday. Since Tom and I were both buried under final papers and exams, we didn't even leave the house until today.

You might recall that Tom has a penchant for odd snow-removal devices. Well, today he decided that a snow shovel was the best thing to use to clear the snow off the car. And he was right. We also took a push broom to it after the first pass with the shovel, and managed to clear it most of the way off. 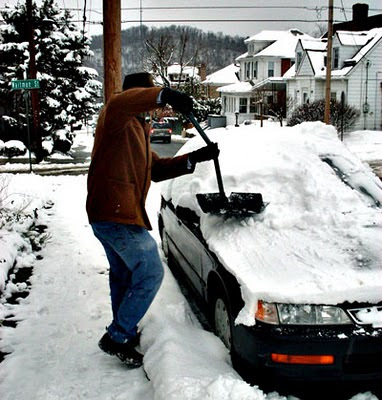 This is definitely the heaviest snow we've had in the two-plus years we've lived in Morgantown; too bad we've been so busy that we haven't had a chance to get out our snowshoes and hike over to White Park. Somehow, I have a feeling we'll have other chances this winter. 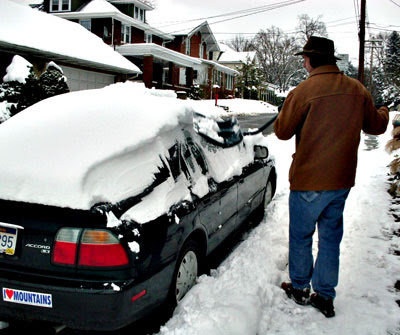 I quote a lot of British poetry when I'm teaching the Brit Lit survey, and perhaps no lines get quoted more often than these lines from the beginning of Shakespeare's Sonnet 55: "Not marble, nor the gilded monuments/ Of princes shall outlive this powerful rhyme."

The irony, of course, is that the fragile paper on which the poem is written seems to have little chance of outlasting the marble and gold of a princely tomb. Blogs would seem to have even less enduring power.

Still, the blog seems the place, in some ways to tell a story or two about Dave Hathaway, who seemed to love to tell stories in his own way. So I'll tell a story about him and a story of his.

First, the story about him: I'll never forget when Rosemary and I first got engaged, Rose's folks were, I think, really delighted (so was I). They had always been very welcoming to me, and always made me feel like part of the family. But after we told them we'd gotten engaged, Dave made an effort to tell Rose and I how pleased he was, and finding us together that evening he said to us, "You two deserve each other." I knew what he meant, but I've always loved the memory, because that phrase seems so often to be used for exactly the opposite effect--it's something you say to people who are (as the Wife of Bath would phrase it) one another's purgatory here on earth.

For his story, I'll tell one I only heard him tell once, although I always meant to get him to tell it again. It was one of his stories from the war, which Rose says he never used to tell when he was younger. But anyway, though he was ultimately a radio operator during the war, before his unit got to Italy, he didn't have much radio work to do, and (in the army way) he either found something to do or was given something to do. Anyway, somehow he wrangled his musical background into being assigned as a bugler.

In northern Africa, apparently, being somehow dissatisfied with the bugle as he found it, he took a blowtorch to it, apparently thinking he could maybe reshape it somehow: of course, the solder joints just melted away, and he was left with a handful of unconnected pieces. When he took it to the quartermaster, he didn't have any real explanation for what happened, and he was understandably disappointed when the brass bugle was replaced by a plastic one. The sound quality was, apparently, not very good.

Still, on the night before the unit was supposed to head off to Italy, the captain, I guess, was away on business of some sort and Dave, when it came time to play taps, couldn't resist the temptation to "swing" it, and he did, and he never got in trouble for doing it, either.

But the story doesn't end there. Some forty years later, when he went to his first battalion reunion, he told the story of swinging taps, and another old soldier came up to him afterwards with a tear in his eye. He told Dave that he remembered hearing taps that night, and hearing it swing, and it made him feel a whole lot better about getting on the boat and going to Italy the next day.

If you ever doubted that music--or breaking the rules--could sometimes do real good, I can't think of a better example.

The last time I saw Dave Hathaway, he was listening to jazz, and I think it made him feel better, too.
Posted by Tom at 7:06 PM 2 comments: