I think it probably goes without saying that I was a weird kid.  I was also a kid who was obsessed with cats.  I hounded (no pun intended) my parents about getting a cat until they finally relented.  When we went to Cat Welfare to pick out a kitten, we took along our family friend Dottie, who had three cats of her own and who had taught me very carefully how to properly pick up and hold a cat.


This technique has worked with pretty much every cat I've ever had up until the present: our black cat, Stella, doesn't like to be picked up or held at all, and has let me know in no uncertain terms that not only is this technique not "proper," it's tantamount to abuse, and if I keep it up she'll report me to the authorities.

Still, the method has generally served me well, especially on one particular occasion.

My grandmother lived in the very small town of Athens, West Virginia, and when I was growing up, we'd often go down to visit.  Trouble was, there wasn't a whole lot to do in Athens, and the options were further limited by my grandmother's ideas about what was proper for girls to do.  So, I often entertained myself by walking through the cemetery that was just down the hill from her house.  There was a path at the back of the cemetery that led down to a barn and a small pond on some land she owned further down the hill, and it was kind of fun to play "pioneer" down there.

One summer day when I was about eight or thereabouts, I was on my way back from the pond, wandering through the cemetery and reading the headstones, when I caught a flash of something furry out of the corner of my eye.  A cat, perhaps?  It was about the right size.

I followed it and discovered that it was, instead, a groundhog.  He was just ambling along, and when he noted me following him, he stopped.  I crouched down and made the usual clucking noises you make to get a cat to come to you, and much to my surprise, he kind of wandered over in my direction.

Or maybe he didn't: to be honest, I don't remember.  I like to imagine that I enchanted him, like a groundhog whisperer, and he realized that I was a Trustworthy Gentle Person.

At any rate, he stopped, or moved slowly enough that I was able to pick him up, flip him on his back like I'd been taught to do with cats, and carry him back to the house. 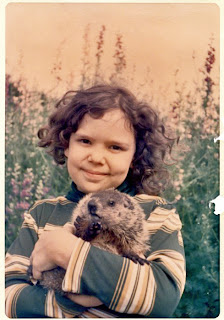 I remember being so excited to show everyone what I'd found in the cemetery--my very own pet groundhog!

My mother, of course, tells me that the adults were freaking out when I came in the house cradling a groundhog, but didn't want to alarm me (or the hog).  So, they very helpfully suggested putting it out on the fenced-in stone patio behind my grandmother's house, where I could visit with it.  And my dad (in typical fashion) maintained enough presence of mind to snap a picture.

The groundhog and I stayed out there for quite awhile.  I probably fed it something; I don't recall.  What I do remember is that when I got up the next morning, the groundhog was gone.  I was disappointed, though in hindsight, it was remarkable that it stuck around at all after I put it down!

A few years ago this incident came up at a family dinner and my parents said they supposed the groundhog was sick; why else would it let a kid pick it up and carry it around?

To be honest, though I was well into my forties by then, that thought had never occurred to me.  For the first time ever I was able to see the event as an adult would: Holy crap, does that thing have rabies?!  Put the pest-ridden wild animal down slowly, little girl.

In addition to the photo, that's the thing I'm most happy to have taken from that experience: the knowledge that at one point in my life, I was innocent and trusting and bold enough* not to worry about such things.


*and stupid!  Did I mention stupid?

We were in Athens for an overnight stay on our way to visit the Beegles and their horses in Charlottesville and then on to Williamsburg.

You decided to take a wander--unbeknownst to us--to the cemetery.  That's where you discovered Chuckie, as you called him, sitting tamely among the markers.  You scooped him up and carried him back to Grandma's.

Yes!  Dad and I were startled and a bit worried.  It seemed strange to us that a wild animal should be so amiable--perhaps he was sick.  Rabies flitted through our minds.   It took some persuasion to convince you to part with Chuckie:  he would not be happy as a house pet, he was used to country life, we wouldn't know what to feed him, etc.,etc. Finally you reluctantly agreed to free him and he scuttled away--under the washhouse as I remember. And your parents tried not to be too obviously relieved. Now we have the picture and the memory, thanks to Dad with his ever present camera.
Posted by Rosemary at 1:48 PM 4 comments: