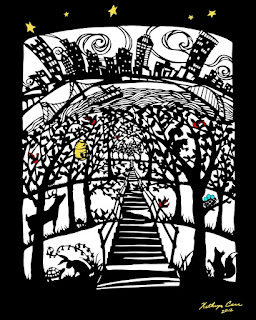 Yes, I know:  long time no blog.  What can I tell you?  The semester started.

However, today we did get out of town to participate in an event I've been wanting to check out ever since we saw a story about it on Rick Sebak's WQED show "It's The Neighborhoods":  the Pittsburgh Step Trek, put on by the South Side Slopes Neighborhood Association:  a 3.5 mile walk up and down the hills south of the Monongahela River that includes 1,815 of the public steps that run along and cut between the twisty roads of the neighborhood.

A chilly, rainy morning in Morgantown didn't bode well for an outdoor adventure--but by the time we got up to Pittsburgh early this afternoon, the sun was out, there was a lovely cool breeze, and it turned out to be a total Chamber-of-Commerce, photo-op kind of autumn day.

The walk was a challenge, to say the least...but totally worth it for the amazing views of downtown Pittsburgh and the Cathedral of Learning at the University of Pittsburgh, and for the intangible "Pittsburghness" of the whole event, for lack of a better word.

First ascent:  these stairs up from South Side Park to Mission Street... 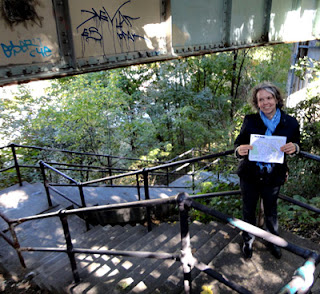 ...past the now-closed Church of St. Josephat, built in 1916 to serve a largely Polish parish, as the language of the cornerstone and the war memorial attest. 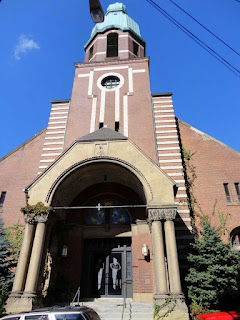 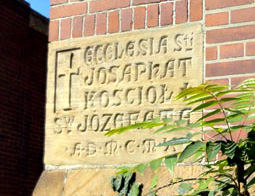 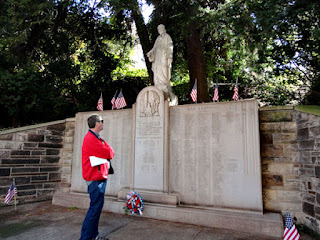 Then up 143 steps for some spectacular views of downtown across a weirdly jungle-y landscape... 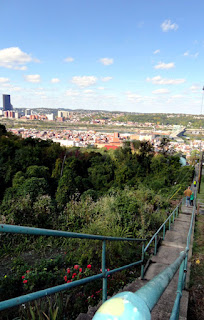 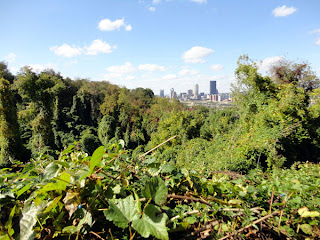 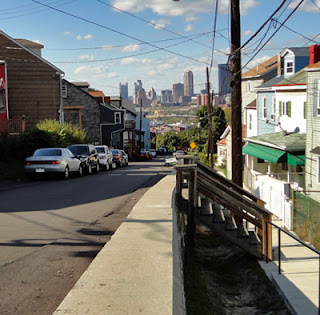 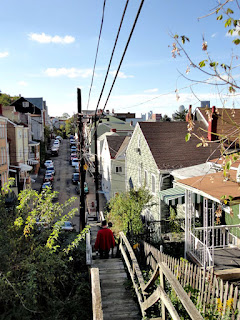 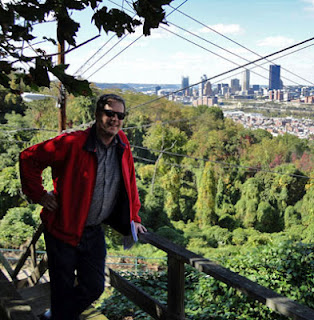 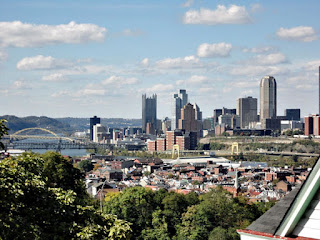 One of the highlights of this year's tour was its path through an area called "The Hollow," home to the city's Slovak community in the early 20th century (according to the guide, the Pittsburgh area is "home to more Slovaks than any other area in the United States").

The heart of the community was this place, the Kollar Club, more formally known as "The John Kollar Slovak Literary and Library Society."  Named for a famous 19th-century Slovak poet, the club is still in operation, "preserving Slovak language and culture, and serving as a venue for live music." 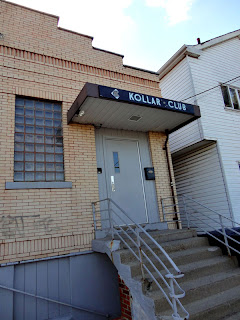 Have I mentioned how much I love Pittsburgh?  It's places like these that make this city such a remarkable place.  Many older, rust-belt cities may have places that used to house to ethnic clubs; in Pittsburgh, they're alive and well and thriving.

Then up another long flight of steps from The Hollow to Mary Street... 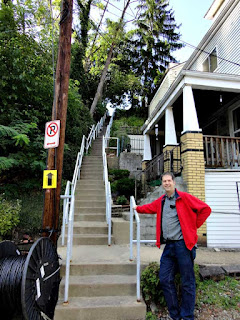 ...with a peek into a charming hidden garden on the way... 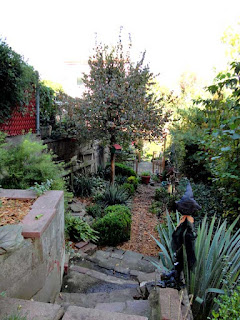 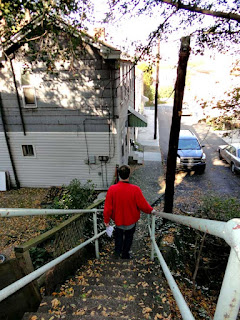 ...and up and down and up and down some more, until it started to feel a little Bataan-Death-March-like, and we wondered how on earth the steel- and glass-workers who lived in these houses and walked  to work in the factories on the river ever made it back up the hill to get home after a long day of work.

And we wondered where they bought groceries, and drank; presumably, back in the day, there were little corner stores and bars at the end of every block.  Now everyone seems to have a car, and they probably drive down to one of the many, many bars along Carson Street.

After we finished, we pondered having a drink ourselves, but instead went to Rita's Custard, also on Carson Street.  We figured we'd already burned off the calories. 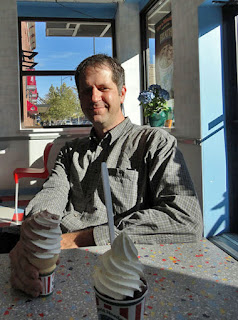 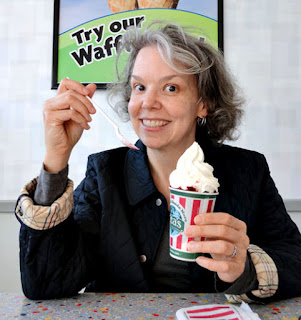 Such an amazing city.  Such a great day out.  And such an inspiring story behind the group that organizes the event, the South Side Slopes Neighborhood Association.

Apparently, the group started up fifteen years ago after three homes were destroyed in a fire because a standard city fire truck wasn't able to get through the neighborhood's narrow, winding streets to reach them.  (Some of the homes in the area can only be accessed by the steps--there's no street access to them at all!)  As the guide notes, "they gathered data and succeeded at making the case for a smaller fire truck with a tighter turning basis.  The city adopted the new design, and now a number of smaller, more-able fire trucks serve hillside neighborhoods throughout Pittsburgh." 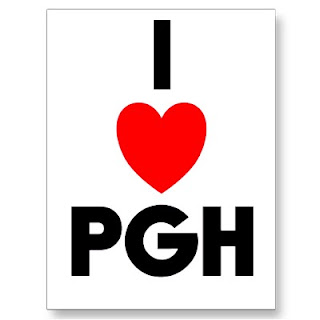