In the last few days, I've encountered two recent works of art that I ravenously consumed, with the emphasis on "rave," and then had second thoughts about: the Oscar-winning Argo, and Ian McEwan's latest novel, Sweet Tooth. By sheer coincidence, both are about covert government operations in the 1970s, and the plot of both turns on the idea of art as political tool and sham. And in the end, both left me feeling like I was the ultimate "victim" of their deceit, in ways that were initially pleasurable but vaguely distasteful afterward.

Argo, as you no doubt know, is about the CIA's successful mission to get six American hostages out of Tehran after the embassy was seized in 1979. Improbably, the operative, played by Ben Affleck, pulls off this extraordinary rescue by posing as a Hollywood producer scouting locations for a desert-based science-fiction film.


The movie is tremendously suspenseful, and Affleck has a hang-dog, bearded earnestness that forces the viewer not only to root for his success, but to share his disappointment that no one could know about it afterward. Archival footage of the revolution alternates with vivid, contemporary restagings that make it viscerally clear just how terrifying it must have been to be in Tehran at the time.

But the movie ultimately emphasizes how terrifying it was to be an American in Tehran at the time.  The Iranians, with the exception of the Canadian ambassador's housekeeper, are portrayed utterly homogeneously, united in their seething, mob-like mentality.  (Read Marjane Satrapi's wonderful Persepolis for a sense of how terrifying the Revolution was for many Iranians, too.)

Though a couple of the hostages are fluent in Farsi, there's no translation of the angry shouts and accusations they face when, posing as a film crew, they go into the bazaar to meet with government officials. This omission underscores the film's portrayal of the Americans as innocent victims of screaming, incoherent maniacs.

The "happy" ending seems to suggest that it was our great good fortune that such savages weren't nearly worldly enough or smart enough to figure out that they'd been duped until it was too late. As the Swiss Air flight the freed hostages take out of Tehran leaves Iranian airspace, they pop champagne and whoop it up, while the other passengers--silent, anxious-looking "natives"--look on in bewilderment. Back at the airport, the security guards rapturously pass around the storyboards that the "director" bequeathed them as he entered the jetway. The moral of the story seems to be that even our bad, fake American art is slick and effective enough to fool these rubes, and thank God for that.

As the credits rolled, I felt duped: I thought Ben Affleck was a liberal? You wouldn't know it by this reactionary film, whose final scenes show his operative-with-a-heart-of-gold character embracing his wife while the American flag waves on the front porch behind them.

Sweet Tooth, too, is about covert ops, but in England in the early 1970s, when MI5 was shifting its concerns from the Cold War to IRA terrorism. The plot revolves around narrator Serena Frome, a recent maths graduate of Cambridge, who's tapped to join the service and eventually becomes part of the agency's "Sweet Tooth" program, which seeks out and funds conservative-learning writers. The catch is that the writers aren't to know that they're on the MI5 payroll: their stipend comes through a nonprofit foundation, and Serena's cover is that she's sort of a talent scout for a third organization that the Foundation uses to locate promising writers. 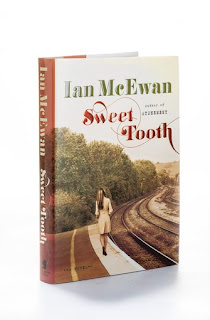 In classic spy-novel cliché, Serena falls in love with her "target," a young writer named Tom Haley whom she's assigned to bring into the program.  Her deception, then, is double: not only is she posing as someone she's not professionally, but personally as well. Haley has published a few anti-Communist articles and several short stories, but hasn't yet written a novel. Serena's job is to get him to write one, which he does, though it's a grim, post-apocalyptic affair that hardly touts the blessings of capitalism and democracy. But by the time he's done, she's too much in love with him to critique its politics.

That's about all that can be said of the plot without spoilers, but as you might expect from a spy novel, there are several unexpected plot twists along the way, things that turn out not to be at all what they seem: some things turn out to be more benign and even more banal than expected, others more sinister. The big twist at the end, though, has less to do with espionage than it does with art and narrative, and the mutual, willing deception that authors and their readers engage in and co-create.

While the ending is clever, and I appreciate McEwan's meditation on the artifice of fiction and reader's willing participation in it, I also found myself feeling more like the butt of the joke than someone who's in on it. Part of this is due to a vague misogyny that comes through in the end, coloring what's come before. But part of it stems from the sense, like the one I felt at the end of Argo, that I'd been conned into thinking I was consuming one kind of art only to have it morph into something decidedly less pleasurable and more pedantic.

In the last few pages of the novel, Healy contemplates the work of other, older writers who were pulled into secret government work during WWII. He asks, "Who says that poetry makes nothing happen? Mincemeat succeeded because invention, the imagination, drove intelligence. By miserable comparison, Sweet Tooth...reversed the process and failed because intelligence tried to interfere with invention."

Perhaps both of these works are really about nostalgia, a longing for that time when invention drove intelligence, when the government didn't manufacture its fictions in-house, but actually needed real artists--Hollywood makeup artists and literary writers--to pull off their deceptions.

But Argo and Sweet Tooth set out to deceive their audiences. And that's an artistic con that wish I hadn't fallen for twice in as many days.
Posted by Rosemary at 2:04 PM No comments: