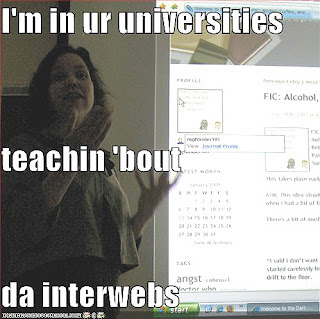 Anyway, the student who mocked up this shot suggested that perhaps there should be a "lolprofs" website, which I think is a fabulous idea. Maybe I'll try to put together some other pics of unsuspecting colleagues and get a start on that...nah. I'm enough of a wack job as it is without going that route.
Posted by Rosemary at 12:58 PM 4 comments:

Well, that explains it

A quick follow-up to the previous post...I just read the New Yorker's review of Judd Apatow's most recent film, Walk Hard, in which male full-frontal nudity plays a prominent role. According to David Denby, the "penis [is] an organ that Apatow, in recent interviews, has vowed to bring into mainstream filmmaking."

Uh, Judd: metaphorically, it's been ALL OVER THE PLACE in your work already. Isn't that enough?
Posted by Rosemary at 7:55 AM No comments:

It's just not funny (by Rose) 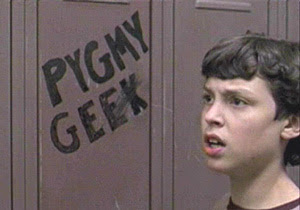 I’m a huge fan of Freaks and Geeks, the short-lived 1999-2000 TV show produced by Judd Apatow, which treated adolescence in about the most realistic way I’ve ever seen—which is probably why it got canceled. It was at turns painful, hilarious, frustrating, and totally honest, carefully probing the all too human depths of each of its characters. The series starred Seth Rogen, James Franco, Jason Segel, and others who have turned up In later Apatow productions, becoming a sort of millennial “brat pack”—except these guys are all in their 30s or 40s.

Even if you’re not familiar with Freaks, you’ve undoubtedly seen some other Apatow production, since he’s been behind almost every successful comedy of the last several years: Walk Hard, Superbad, Knocked Up, The 40 Year Old Virgin, Talladega Nights, Anchorman. In most of these, you can see his trademark mix of satire, sentimentality, and a weird obsession with gender politics, especially the oddball tribalism of guys. And most of the time, it works and is funny. But recently I’ve seen both Superbad and Knocked Up on DVD, and was completely turned off by both of them—like, close-to-hitting-stop-and-ejecting-the-DVD turned off.

In Knocked Up, this is gotten around by having Katherine Heigl’s character join her unlikely beau in screening movies to spot the tit shot; in Superbad, Seth’s friend Evan toes the pansy “you need to respect women” party line, refusing to have sex with a girl he’s liked for years because she’s drunk. The ultimate punch line is that the girl Seth is chasing turns him down because he’s drunk, creating a lame “feminist” joke that really only underscores the film’s misogyny by showing how that kind of turnabout just emasculates Seth even further.

(The 40 Year Old Virgin manages this delicate balance of crassness and emotional weightiness, too.)

So, the way in which both Knocked Up and Superbad seem to revel in the insularity of that adolescent view of sex, even to celebrate it—well, to me it seems so backhanded, like “You know we don’t really think this way, but isn’t it funny? Isn’t it?!?!?”

Not to mention the pure male fantasy of Knocked Up: would any sane woman actually keep Seth Rogen’s baby AND date him, too? (Don’t even get me started on the way that abortion is handily ruled out as an option for the sake of the plot.) And the way in which menstrual blood is both fetishized and loathed in Superbad—it’s just appalling.

Judd Apatow, what happened? I know you can do better than this. Or maybe I just need to stop watching movies with Seth Rogen in them. He is the common denominator here…hmmm.
Posted by Rosemary at 8:04 PM 4 comments:

An MLA Story (by Tom)

It seems to be the case that I was not cut out for life in a big city: it is a favorite story of Rosemary’s to describe the time when I was in downtown San Francisco, standing on the sidewalk and counting the money in my wallet. To me, there seemed to be nothing unusual about doing so, but—as she pointed out—I was a walking advertisement for a pickpocketing incident. When it didn’t happen, of course, I took it as a kind of vindication.

At the MLA convention in Chicago this winter, however, I had another big city incident. After giving my paper, Rosemary and I hurried through snowy downtown Chicago towards Rick Bayless’s restaurant Topolobampo (where we had a very nice lunch). Dressed in my MLA outfit (khakis, jacket, long woolen coat, leather shoes), once more I had no idea how much I must have looked like a prime target for the ministrations of Chicago street entrepreneurs.

Sure enough, as we were hustling along, I was stopped by a guy who quickly launched into a complicated routine about my shoes and the snow and slush, and before I could even say “no,” he had smeared some kind of oily goop on my shoes and was giving me his highly polished (and, I have to admit, entertaining) rap about taking care of shoes in the wet Chicago streets. “This will keep you from getting that line of salt around your shoes when they dry out,” he told me, as he smeared the stuff around with a polishing cloth. “Keep your feet dry, too. And let me apologize for being so aggressive in stopping you all, you know, but it’s a hard way to make a living out here.”

“How much do I owe you?" I asked with some resignation when he had finished “polishing” the shoes.

“Five dollars for the polish; the tip is up to you.”

So I gave him a five, and a George Washington dollar coin. Once burned, now, I was worried that I’d get hit with the same scam in the next block—I looked like an easy mark, obviously—so I asked him what I should tell the next guy who tried to polish my shoes.