The lighter side of ephemera

Here's a site after my own heart: a paean to the joys (and horrors) of kitchy paper crap from the past. One look at this and--sorta like Proust's madeline--I was transported back to elementary school, where all the teachers dressed just like this.

And did I have a "Little House on the Prairie" getup? And elephant-bottom pants (so called, I guess, because they were even wider than bell bottoms)? Well, I think the evidence is right here. 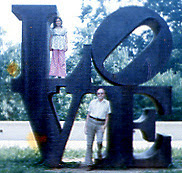 Last Saturday Tom and I went down to Fairmont, WV, to troll a couple of antique malls. At the first one we went to, Tom showed up at the checkout counter with this object, saying it was in a book he'd been looking through. He asked the owner if he could buy it without the book (which didn't interest him), and after she looked it over for a minute, she asked him, "Why would you want that?"

[What it is: a handmade book of school football cheers from the 1930s or 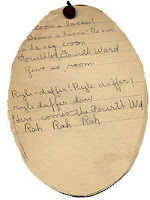 I can't tell you how much of this stuff we've collected over the years: dance cards from the 1920s, valentines from the Victorian era through the 50s, promotional cookbooks (see below), old postcards, and various other odd bits of paper material that collectors refer to as "ephemera."

I've been thinking about that term, "ephemera," a lot lately. Last summer, one of my dearest, oldest friends, Christina Cappelletti, moved back to Ohio after many years in the Bay area. Though she'd ditched a lot of stuff before her move (even having a ritualistic bonfire to destroy a lot of stuff she'd been hauling around for years), she held onto a stack of old letters that she'd received from me and our mutual friend Kristin during college.

After she'd settled in to her new house in Columbus, Christina invited us over and we spent an amazing afternoon reading over these letters. Some were hilarious (a letter from Christina which basically came to the conclusion that "Spring is all about f*cking!!!"); some sobering (a letter in which I described a humiliating experience that I'd always felt guilty about, but which--after reading the letter I'd written to Christina afterward--was clearly date rape); some incriminating (the letter that proved, despite her vehement denials, that Kristin not only smoked, but inhaled in college).

I understand that such things are labeled "ephemera" because they are so often lost, discarded, destroyed--and because they capture such specific and fleeting moments in time. But that term seems so dismissive in its suggestion that such objects are trivial and weightless. I can tell you from my experience of that afternoon that rereading those letters, holding them in my hands, was a far weightier and meaningful experience than flipping through a photo album or watching a home video of that same time period would have been. Far from being "trivial" and "light," that ephemera knocked me on my ass as unexpectedly and suddenly as if I'd been sideswiped by a car.

I still have the letters that Christina and Kristin (and others) sent me during college and afterwards, but it was a very different experience to see what I'd written to them all those years ago. And yet, I couldn't tell you the last time I wrote a personal letter to someone. The three of us were amazed at how much we'd forgotten, or misremembered, or blocked out that came back to vivid life on the page, especially when seen in one's own undeniable scrawl. And we wondered: what happens to all these memories now, in the age of e-mail and text messaging and--god forbid--blogs?

I don't want to fall into the trap of romanticizing the written word and lamenting "kids these days" and how much they're missing. But given the rapid pace of technological change, even if people diligently archive all their e-mail and other electronic correspondence, will we still be able to access that stuff in 20 years? And will the experience of rereading those missives on the screen be the same as holding a letter you wrote, stuffed in an envelope, and mailed to someone decades ago?

Someone bothered to write down those stupid cheers and put them in a in a misshapen-football booklet. The back of the valentine pictured above reads "To Ned from Wilbur." I don't know who any of these folks are, but I admire the care that went into the assembly of the football-cheer book, and the wobbly grade-school handwriting on the valentine. Perhaps, then, ephemera is aptly named, since it's becoming ever more ephemeral: while there's a lot of paper crap documenting the 20th century, there's probably going to be ever less of it as we move to a "paperless" ideal.

And, even if it is hopelessly romantic to say it, that strikes me as sad. In the end, these pieces of ephemera are often the only, and certainly the most personal remnants of our past and those we loved.

In looking through my own old letters to share with Christina and Kristin, I came across a number of letters from another friend I'd had since childhood, Jay Solomon. Jay died of AIDS in the summer of 1986, shortly after his 21st birthday.

One of the letters I came across was from the spring of that year, when he was in Florence for his junior year abroad. It's dated March 23rd...just a little more than four months before he would die, at the end of July. There's nothing in that letter to indicate that he was sick, or knew he'd been infected; rather, the letter is full of classic funny Jay observations...stories about his roommate, a guy from Duke who, when getting ready to post his own letters, "licked each stamp ten times--twice at each corner and twice in the middle!!"...and rapturous descriptions of Italian art: "The Sistine Chapel is a miracle of painting--I'm sure you've heard it before, but it's true."

It's ephemera, to be sure...just as his life, and life in general, is all too ephemeral. But rereading it now means so much more to me than it would have in March 1986--it offers me some comfort to know that he didn't spend the last months of his life in fear or pain. And then there's Jay's beautiful handwriting; I'd forgotten about that.

So. "Why would you want that?" Because in the end, what else is there but ephemera?
Posted by Rosemary at 4:20 PM 2 comments: