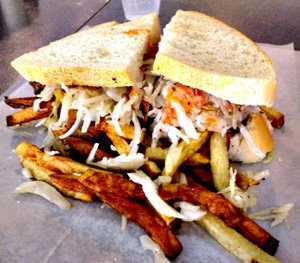 So here it is, the day before the Super Bowl, and we decided we'd head up to Pittsburgh for a little visit to the strip district, where we wanted to go and buy some food from the Italian grocery stores they have there, and maybe get something nice for lunch.
For those of you not from around here, the strip district is just north of downtown, an old warehouse district where the rail lines came right downtown and offloaded fruit, fish, and everything else.
Now it's kind of a mixed use neighborhood: some warehouses still thriving, a couple of nightclubs, I think, and a sort of foodie center. Lidia Bastianich's restaurant is there, Primanti Brothers, where you get fries on your sandwich, all served on a square of waxed paper instead of a plate, and you can go to Wholey's Fish Market, or the Chinese, Mexican, or Italian grocery stores. Or a variety of more upscale food shops.
Usually when we've been there, we've seen a few street vendors hawking Pittsburgh Steelers merchandise, but when we got there today, a whole section of Penn Ave was blocked off, and the street vendors had practically taken over the whole place.
The atmosphere was festive and everyone was in black and gold, waiting in line to get into some of these places--especially the ones with Steelers stuff, like Mike Feinberg's. You could get a shirt that had a map of Slovenia and said "Slovenian Steelers Fan--Part of Steelers Nation." (Or similar ones for "Mexican," "Afro-American," and even "Hunky" Steelers Fans...that's Hungarians in the local parlance.)
So we went to the Pennsylvania Macaroni Company, got our two bags of stuff: semolina flour, pesto, some cheap shallots; had a very nice lunch at Cafe Raymond; and got a bag of Dutch process cocoa.
And here it was twenty-five degrees outside, and the street was like a party, despite the slushy puddles (and trampled black and gold streamers) everyone was standing in. Everyone seemed happy, spending their money on Steelers hats, shirts, and everything else like there was no recession. There's something pleasingly unpretentious about a town where you can go to the gourmet district and buy all the football gear you could ever need.
Posted by Tom at 8:38 PM

Tom doesn't mention that the whole scene in the Strip had a soundtrack, in the form of the very annoying "Here We Go Steelers" song blasting from speakers everywhere. You can listen to it on YouTube at http://www.youtube.com/watch?v=6bxXaIqO6zs&feature=related.

Do so at your own peril, though, 'cause it'll get stuck in your head!

Is that a photo of something one of you ate? Boy howdy, that's a big, weird sandwich.

Maybe it was good karma for the Steelers? It looks like they're up in the 4 quarter, last time I looked.

Historiann, that's a classic Primanti Bros. sandwich (click the link in Tom's post for more info). It's kind of the archetypal Pittsburgh foodway...but it is, as you say, a big, weird sandwich.

We didn't eat there on Saturday, figuring the place would be jammed, but had lunch at a bakery/deli place close by. I had the veggie muffalata--also big and delicious, but without the topical application of cole slaw and french fries.

We missed Primanti's when we went back to see my family but we did hit the Original Oyster House‎. Great place for a late night snack.

If you need some german food Max's Allegheny Tavern serve quite a serving of good food.

And if you feel the need for nightlife and culture East Carson street on southside is 10 miles of bars, restaurants, and art galleries and stuff.

And have you been to Kennywood yet?

I think Pittsburgh is a very fun town, very different from what I remember in the 60's visiting the grandparents in Carrick. Hard to believe how much population its lost in the last 30 years.

"Earl," we think about you (and, uh, "Mrs. Earl") every time we go into PGH. Haven't hit the South Side or Kennywood yet...so if you do come through again this summer, we'll have to do that!

PGH *is* a fun town--very different from the Rust Belt city I was expecting. It seems to have revived itself more successfully than most, and there's such a variety of interesting old neighborhoods that are unique but somehow all merge to create a really unified sense of place.

But again what i find very interesting is how much of a population drop P'burgh has had.

and i quote:
"The Census Bureau found that about 60,000 people had left the seven-county Pittsburgh metropolitan area in the years 2000 to 2006, bringing the population to 2.3 million people. Pittsburgh is the only large metropolitan area where the death rate exceeds the birth rate.

@Pam--absolutely! I'm always ready for a trip to the strip. And Justin would love it, too, since the vendors are always selling lots of Steelers crap.

@Earl--Wow, those numbers are startling. I guess that's the point, though; despite what looks to be a mass exodous, PGH still seems to be a vital, lively, and economically healthy place. Maybe I'm wrong, but...