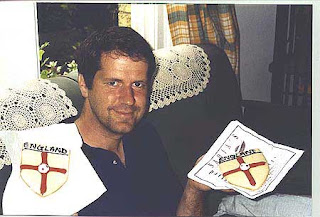 I can trace my real fascination with the World Cup to our trip to Europe in the Summer of 2002. We were in Paris, just barely getting by on our rusty French, when Senegal beat France in what has sometimes been called the greatest upset in football. Then we moved on to England, where I was scheduled for a week in the Parker Library in Cambridge.

Because Rose and I have been in Cambridge more than just about any other city, and because I'd worked in the Parker for six weeks in 1997, a visit to Cambridge almost always feels like being at home. And Cambridge was very much caught up in the fortunes of the England team, and the St George's Crosses were everywhere, including on iced cookies. At first, I wasn't too involved in the football fever; I had talked to the librarian at the Parker, and asked her if she was following the England team, and she shrugged it off, suggesting that she didn't care much one way or the other. And so I thought that was the way to see things.

But one afternoon, Rose and I were in the market in downtown Cambridge, right at the time when an England match was going on. Every stallholder in the market seemed to have the match on the radio, and a few had tiny tvs they were peeking at now and them. But everything else was business as usual.

Until England was given an penalty kick, and David Beckham was lining up to take it. Suddenly, everyone in the market started paying attention, and people crowded closely around the few tvs. The crowd grew quiet, until Beckham made the kick. There was a great shout, and everyone was happy, and even the foreign visitors couldn't help feeling like we'd been part of a community moment. The next day, even the librarian told me she had managed to find a way to listen to the match.

We were on the bus to Heathrow when the next match was being played, and Rose let me try to tune in the battery-powered radio we had to listen in. At least three or four other people on the bus were also listening, and the other riders got constant updates, and certainly heard our semi-conscious sounds of excitement and tension. It was a strange kind of shared experience: we were all wearing headphones, listening alone. But we were part of a group, too.

This year, I've caught maybe half a dozen matches so far. I usually say I like to watch sports on tv because something always happens, and it never really matters. But But Beckham's penalty shot in the Cambridge market mattered, to me and to Rose at least. I'll never forget it.
Posted by Tom at 6:11 PM

--and I remember that when the France/Senegal game was being played, we could hear sporadic shouting and cheers through our hotel window. That, followed by the experience in Cambridge, really drove home to me what a huge deal the World Cup is everywhere in the world but here in the U.S.

I was in France in 1998, and even as a devout fan already, was stunned at how life completely revolved around the matches.

Though I have to say, I wouldn't want to be in England or France at the moment, considering the current fortunes of both teams!

Maybe we should plan to meet up next time the cup is in Europe...