Gems from the archive 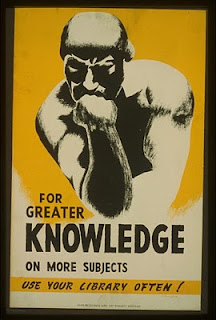 This summer, I'm hanging out in the West Virginia and Regional History Collection, aka the university archives, researching the folklore materials that were collected under the auspices of the state branch of the Federal Writers Project in the late 1930s/early 1940s.

An offhand comment about spending my summer in the "musty old archives" on Facebook prompted my friend Susan, an archivist, to object, saying, "Musty old archives, indeed! My profession is filled with angst about 'dusty, old,' but maybe we should just embrace it."

In the spirit of complete disclosure, I should note that I have never worked in an archive that was musty or dusty (with the possible exception of the Ohio State Folklore Archives, which were in the basement of Denney Hall when I was in grad school, and were just depressing, and not dusty or musty).

Actually, all of the archives I've done research in have been "clean, well-lighted places" of calm and quiet.  As a proud and professional nerd, I love doing archival research.  I can get absorbed in files for hours and not be remotely aware of anything that's happening around me--it can be a very Zen experience.  It's one of the few academic tasks I can engage in where my anxieties about getting published and getting tenure melt away in the pure pleasure of discovery.

Anyway, that's a long preface to presenting some of the more amusing tidbits I've discovered recently.  As with all archival material, it's a mixed bag:  some brilliant stuff, some appalling stuff, and a lot of random stuff that makes you wonder why on earth anyone bothered to save it.

The guy who collected folklore in Doddridge County, for example, must have been some high-ranking official's nephew, because not only does he not have a clue what folklore is, he can't spell worth a damn.  One of the things he seemed determined to collect were his interviewees' statements about their "ideals." And thus he explains that one man's greatest wish was to "give the wormest receptions to the staranger as well as his closest friends as he pollible can do."  Truly, words to live by.

It's items like that that make me appreciate how well-written and thoughtful most of the other materials are, and already, collectors from certain places are emerging as tremendously skilled fieldworkers (like Charlotte Clauze from Jefferson County, who I hope to find out more about).

But today's gem was the following parody of Joyce Kilmer's "Trees," a poem that richly deserves to be parodied.  (You know:  it's the one that starts "I think that I shall never see/ A poem lovely as a tree.")


I think that I shall never see,
Along the road an unscraped tree.
With bark intact, and painted white,
That no car ever hit at night.
For every tree that's near the road
Has caused some auto to be towed.
Side-swiping trees is done a lot
By drivers who are not so hot.
God gave them eyes so they could see,
Yet any fool can hit a tree.

Image at top is from the Library of Congress' fabulous WPA Poster Collection.
Posted by Rosemary at 8:28 PM

Lol, love Both of those.

So glad to hear you are having such a good time in the archives. Maybe the Society of American Archivists can quote this piece in its p.r.?